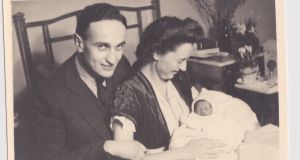 Seventy years ago in 1946 the Communist Party of Czechoslovakia emerged as the largest political party in free elections forming a coalition government with the support of smaller parties. By that time Denis Scrivener (born Zdenek Skrivenek) had returned to Prague with his new Irish wife Nan Keating. But the Communist Party soon became a tool of the Soviet Union and a dictatorship followed for over 40 years.

The Skriveneks and the Scriveners (A Czech in Ireland)

The half-Jewish Denis had already endured the murder of his sister and her two children in the Holocaust, along with numerous other family members.

Now demobilised, he observed unruly Russian soldiers flooding into Prague. He recalls how their chief leisure occupation “became the stealing of motorbikes, robbing people of watches and molesting our women who didn’t have to be young or pretty to attract their unwelcome attraction”.

Denis had returned to work in his father’s successful furrier business and he and Nan were living on Wenceslas Square in the heart of the city. By that stage Nan had learned Czech and together they enjoyed a lightness that settled briefly over Prague before the unhappy tide of history washed through once more.

A daughter, Maria, was born but Denis’s anxiety was growing over what was happening as the communists asserted total power by expelling other parties from the coalition.

He made up his mind after the apparent suicide in 1948 of the one non-communist member of the government, foreign minister Jan Masaryk, son of Tomas Masaryk, the founding father of Czechoslovakia. A police investigation in the 1990s concluded that he was thrown from his balcony in the ministry.

The first port of call was the family farm in Powerstown, Co Tipperary, which at the time had no electricity or running water. Denis arrived first with his daughter Maria, who initially refused to speak English despite being brought up bilingually. Nan followed soon.

In time Denis would become a successful entrepreneur, but along the way he was treated abysmally by a number of employers as he struggled to support a growing family that would soon include a son, John, and another daughter, Cathy.

He endured a particularly unpleasant experience with one Cork businessman who tricked him with the promise of a Dublin franchise.

He recalls that this was “my first Irish experience of being let down in a major way, to be followed, over the years, by many others”.

He reckons that “there was no question but that as a foreigner I was severely discriminated against”.

At last Denis became a salesman of tractors in the era of the Massey Ferguson. He says that “working in my father’s business taught me quite a bit about how to create the desire in a prospective customer, how to present my product in a way that would meet his expectations and how to close the sale”.

Denis’s methods included keeping a file on all prospective clients that would allow him to ask about the wellbeing of a son in America or how the farm’s sideline in potatoes was doing.

Denis’s survival instincts are an inspiration to anyone who finds themselves in a new country, as I do now in Prague on a romantic journey in the opposite direction. It is also a tale for our time as we see millions of refugees passing through Europe once again. His example illustrates how migrants often bring a work ethic and dynamism to their host societies.

1 FinCEN Files: Dublin business features in leak of US treasury documents
2 The secret to an airy and light scone with a pillowy interior
3 Life from the age 40 until your first hip-replacement is actually rubbish
4 The FinCEN files: The billion dollar a month money trail
5 The Sack of Balbriggan: The burning of a town that shocked the world 100 years ago
Real news has value SUBSCRIBE