An Garda Síochána’s core flaw is its secretive ‘cop culture’

The force requires a systemic and cultural transformation driven by politicians 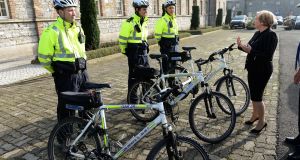 Police accountability has been described as one of the thorniest conundrums of statecraft, as it involves a commitment to “watching the watchers”.

It involves ensuring both that the police are subject to oversight in the exercise of their extensive legal powers and that policing policy is subject to public influence and direction and that the massive public resources invested are used effectively.

In both respects it can be said there is an accountability crisis in Irish policing. It is a crisis that cannot be explained away by the “rotten apple theory” of police misbehaviour.

Although the allegations that will be investigated by the Charleton tribunal concern senior Garda management, other recent scandals permeate all levels of the force.

These include the excessive Garda reaction to a “Reclaim the Streets” demonstration in Dublin in 2002 and the failure of Garda members present to identify colleagues who had used their batons inappropriately; the revelations of the Morris tribunal; the controversial policing of protests against the gas pipeline in Rossport, Co Mayo; concerns about the bugging of the offices of the Garda Síochána Ombudsman Commission; the recording of phone calls in Garda stations between individuals in custody and their legal representatives; and concerns about the manipulation of crime data on the Garda Pulse system, most recently relating to roadside alcohol breath tests.

In relation to operational policing, a 2014 report by the Garda Inspectorate found a police service with “systematic operational deficiencies”, where “potentially hundreds of thousands of Garda staff hours and resources, which should be spent on frontline policing, are currently allocated to . . . inefficient processes”.

Ongoing disputes over Garda pay and conditions and the presence of armed police on the streets of Dublin in response to drug- and gang-related violence provide further context to these problems.

The Charleton tribunal will hopefully advance the cause of justice for Sgt Maurice McCabe and the other Garda whistleblowers.

Addressing the more fundamental issues will require a transformative approach more akin to that brought about by the Patten Commission in Northern Ireland, as the current problems are rooted in the retention of an anachronistic policing model and a culture of policing not suited to the policing needs of contemporary Irish society.

At this time of historical reflection, perhaps one of the greatest achievements of the founders of the State was the creation of a publicly acceptable unarmed police force out of the ashes of a civil war.

However, the adoption North and South of the centralised and hierarchical colonial policing model, exemplified by the Royal Irish Constabulary, would reflect both the political volatility of the period and a general lack of imagination.

The Free State authorities sought to create a police force based on public consent, while retaining a model whose essential structure and character was defined by the absence of such consent.

Notable also by its absence was any formal process of external accountability whereby the public could hold its servants to account.

Structurally, the Garda remained, in the words of one commentator writing in the 1980s, “a great, top-heavy, over-centralised bureaucracy in its Phoenix Park headquarters”.

In the absence of any effective system of external accountability, control of the force rested primarily with the Garda Commissioner.

The ideological premise upon which the authority of An Garda Síochána would be built would also be formulated during this period.

The gardaí would be Irish in thought and action and, in the oft-repeated words of the first Garda commissioner, Michael Staines, in 1922 they would succeed, “not by force of arms or numbers but on their moral authority as servants of the people”.

Such claims to “moral authority” rested on members of the force being models of discipline and integrity.

Given the importance of such romantic imagery to the public status of the force, the commissioner could hardly be expected to “wash the force’s dirty linen” in public.

In the process of its formation, An Garda Síochána had been placed on an unfeasibly high pedestal. It was a lofty height from which it could only descend.

Such a culture, albeit inevitable, can become problematic and a device for shielding wrongdoing from investigation by outsiders.

In Ireland, this “cop culture” has been compounded by the impact of political unrest in Northern Ireland.

On the one hand, it has facilitated the persistence of an internal culture of hyper-defensiveness to criticism and, on the other, it has resulted in politicians being extremely reluctant to criticise the force.

As one former minister for justice put it: “There is nothing between us and the dark night of terrorism but that force. While people in this house and people in the media may have freedom to criticise, the government of the day should not criticise the Garda Síochána.”

It is instructive to note the whistleblower cause has been championed primarily by left-wing Independents.

The 2014 review of the Department of Justice also identified a deferential relationship with the Garda Síochána and “a closed, secretive and silo culture which has inhibited the capacity of the organisation to question and to challenge, and therefore to learn and adapt”.

This culture, it stated, “permeates much of the department’s remit and has become part of its DNA”.

The Garda Síochána requires a systemic and cultural transformation and this can only be achieved where there is sufficient political will to drive it. It is here that the Patten process is important.

Through a process of public engagement, it got to the heart of the legitimacy crisis confronting the Royal Ulster Constabulary and went on to produce a blueprint for the policing of democratic societies in the 21st-century.

Notwithstanding the various policing controversies to date, public confidence in the Garda Síochána has remained consistently high and stable.

This is because, for many people, their day-to-day interaction with Garda members is of a positive and reassuring kind. This is a vital resource which should not be squandered.

We don’t need another international expert as proposed by the Independent Alliance.

There is now an infrastructure of police accountability including the Garda Síochána Ombudsman Commission, the Policing Authority, Joint Policing Committees and localised policing forums.

And although recent contributors to this paper, most notably Prof Dermot Walsh (The Irish Times, February 17th) have highlighted the limitations of these entities, these problems are not insurmountable.

In its report 2015 Changing Policing in Ireland: Delivering a Visible, Accessible and Responsive Service, the Garda Inspectorate has set out a template and timeline for the modernisation and restructuring of An Garda Síochána to ensure the greatest proportion of personnel is deployed in frontline policing services.

It states that “if the recommendations are implemented, the Garda Síochána will achieve best practice and be in a position to set international standards for policing”.