Air strikes on Syria echo fatally back home in Paris

False alarm sends crowd into panic and stampede on Paris streets. Mourners and police are on high alert for follow up attacks. Video: Reuters 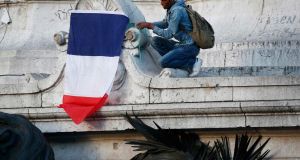 A man attaches a banne to a statue at Place de la Republique near sites of the deadly attacks in Paris on Sunday. Photograph: Benoit Tessier/Reuters

Two themes have emerged from the horrific slaughter of at least 129 people in Paris on Friday night: that France is engaged in an all-out war with Islamic State, and that Paris is unlikely to be able to prevent further attacks on her territory.

“France will be merciless against the barbarians of Daesh,” president François Hollande said on Saturday, using the pejorative, Arabic abbreviation for “Islamic State in Iraq and Syria”.

The attacks were expected. With chilling prescience, French prime minister Manuel Valls warned in an interview with L’Opinion, published on Friday, that he feared “attacks at any moment”. He alluded to the downing of a Russian aircraft that killed 224 people over the Sinai desert, and the bombing that killed 43 people in a Shia neighbourhood of Beirut last week. “Will they come to Europe?” Valls asked. “They want to.”

On Saturday night, Valls promised that France will respond “blow-for-blow . . . [to] annihilate terrorism”.

In Parisian conversations, on media talk shows and among opposition politicians, there’s a subdued but persistent questioning of Hollande’s Syrian policy, saying France would not have suffered such tragedy if Hollande was not bombing IS. Nonsense, say government supporters: it would have happened anyway.

The first important date in Hollande’s policy towards Syria was August 2013, when France was poised to bomb Bashar al-Assad’s regime for using chemical weapons. The French president, reluctantly and bitterly, cancelled plans when US president Barack Obama backed out.

In September 2014, France decided to bomb IS targets in northern Iraq, because it feared the jihadists would seize Erbil and massacre its population.

Hollande initially refused to bomb Syria on the grounds that it might help Assad. The Syrian dictator mocked him before a French delegation to Damascus on Saturday, saying “erroneous French policies . . . contributed to the expansion of terrorism”.

France’s fervent opposition to Assad has in no way endeared it to IS. On the contrary. France is the most ardent supporter of the Free Syrian Army (mostly Sunnis who’ve defected from the Assad regime) and “moderate” Islamist rebels opposed to Assad. These groups are arch enemies of IS.

Hollande reversed policies two months ago, when he announced that France would, after all, participate in the coalition that is bombing IS in Syria. His primary motivation was to prevent exactly the sort of attacks that occurred on Friday night.

Some 1,800 French citizens or residents are involved in jihadist networks, and Hollande saw the air strikes as a pre-emptive measure. French aircraft have targeted French citizens in Syria, in particular on the night of October 8th-9th, when they sought to kill Salim Benghalem, the man believed to oversee the training of French recruits to IS.

“As long as you continue to bomb us, you will not live in peace,” a bearded IS militant said in a video claiming responsibility for the Paris attacks. “You will even be afraid to go to the market.” All French open-air markets have been closed until November 19th.

Many commentators found the attacks arbitrary, but they were consistent with the instructions of Abu Musab al-Suri, the jihadist ideologue who published a 1,600-page manual on Global Islamic Resistance a decade ago. Don’t attack America; it’s too far away, al-Suri advised followers. Concentrate on Europe; on Jews, intellectuals, sporting and cultural events. The Charlie Hebdo and Hyper Cacher attacks last January killed Jews and intellectuals. The November 13th slaughter targeted French people at leisure.

There are many reasons why France is a soft target for IS. In a country which offers insufficient opportunities to its youth, Frenchmen are converting in shocking numbers to radical Islam. The phenomenon is amplified in Europe’s largest Muslim community.

Many French Muslims believe that laicité – state-enforced secularism – is thinly veiled Islamophobia, particularly the ban on headscarves in schools and on full-face hijab in all public places.

IS often makes historical allusions to medieval French crusaders, and to Franco-British perfidy in carving up the region in 1916. France has been the protector of Christians in the Middle East since the rule of King Louis IX in the 13th century. IS’s claim of responsibility for Friday’s attacks said it had “targeted the capital of abominations and perversion, the one that carries the banner of the cross in Europe”.

But ultimately, the chaos in the Middle East – and by extension the attacks in Paris – are the result of George W Bush and Tony Blair’s mendacious, disastrous 2003 invasion of Iraq. High-ranking Baathists from Saddam Hussein’s intelligence services, though secularists, joined forces with the jihadists who fought the occupation of Iraq.

Al-Qaeda in Iraq bred the even more extreme offshoot, IS. There’s a straight line between the radicalisation of Abu-Bakr al-Baghdadi, the IS leader imprisoned a decade ago in the Americans’ Camp Bucca, and France’s present torment.

The US and British governments have recently deployed small special forces units in Syria, to launch raids and co-ordinate Kurdish militias. France already has advisers in Iraq. It may soon be forced to send them to Syria.

It could be the slippery slope to a ground war in Syria. None of the western powers wants that, but they know they cannot defeat IS with air power alone. The deployment of “crusader” troops is exactly what the jihadists want, the sort of reaction that the Paris attacks were calculated to provoke.