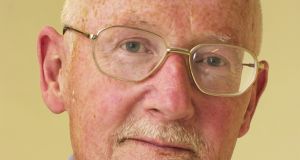 Sadness at the passing of Brendan Ó Cathaoir is tempered somewhat by the fact that before he died he managed to complete the enormous task he had set himself in the last decade of his life – the editing for publication of the wonderful diary of Elizabeth Mathew Dillon.*

Brendan was a subeditor on this newspaper for most of his working life and hugely popular with colleagues for his courtesy, wit and wisdom. He was also a respected historian who wrote a fine biography of John Blake Dillon, one of the leaders of the Young Ireland movement in the 1840s. He was awarded a D Litt degree by the NUI in 2004 on the basis of his published work.

It was while writing his biography of Dillon that he started to explore the diaries of Elizabeth Mathew, the remarkable woman who married Blake Dillon’s son John, one of the key figures in the Home Rule movement. In 1907 Elizabeth died tragically at the age of 42 giving birth to her sixth but stillborn child. The 38 volumes of her diaries are in the library of Trinity College.

Their impact on Brendan is summed up in his acknowledgements at the beginning of the book. “Editing the diary of Elizabeth Mathew Dillon became a work of love. While reducing it to publishable length was a challenge – taking the best part of 10 years – occasionally one experienced the privilege of being in the company of a beautiful mind.”

Elizabeth Mathew was born in London in 1865 the daughter of Sir James Mathew, a native of Cork and a nephew of the Apostle of Temperance, who became a leading barrister in London and then a judge. She began to keep a diary at the age of 14 and it became increasingly interesting as she grew older and moved in a social milieu where she encountered some of the leading political and legal figures of the age.

Her father’s politics were liberal and, as she grew more politically aware, the devoutly Catholic Elizabeth became committed to the cause of Irish nationalism. She hero worshipped John Dillon long before she met him. When they finally did meet she wrote: “He is the first person who has awed me. I feel quite equal to keeping up a conversation with all the bench of judges and any number of lord chancellors but Mr John Dillon made me feel what a poor, miserable thing I am after all.”

It took Dillon almost 10 years to respond to her evident affection and he only did so after she sent him a letter with an ultimatum, not mentioned in the diary.

What makes the diary so riveting are the penetrating descriptions of the people she met. For instance during a holiday in Killiney in 1886 she lunched with prominent Dublin solicitor Sir George Fottrell, whom she described as “a most interesting, clever man”, but added, “I devoutly wish Mrs Fottrell did not talk so very loud: no doubt it is because she comes from Belfast. ”

The diary is fully of sharp comments about political and legal figures in Dublin and London but she also displayed an acute insight into politics. After the introduction of the Second Home Rule Bill in 1893 she dined at Westminster with Dillon, Michael Davitt, William O’Brien, TP O’Connor and David Sheehy. “The reading of the Bill a second time is a phase that cannot be gone back upon. The fulfilment can only be a question of time – and that is a wonderful realisation,” was her prescient observation.

First and foremost the diary provides a rare insight into the life of a woman, admittedly a privileged one, in the late Victorian age. It also provides a glimpse into a forgotten world in which Irish nationalists and English liberals combined to make this country’s march to independence inevitable.

Brendan’s introduction to the diary contains a mini-biography of Elizabeth and his careful editing and detailed footnotes bring the cast of characters to life. It is a wonderful job, worthy of its subject, and a fitting last work by a fine and lovely man. * The Diary of Elizabeth Dillon, edited by Brendan Ó Cathaoir (Currach Books) €35.