No 10 needs to start defining what the gentler road out of the EU looks like, whatever ructions it causes with hardline Tory leavers 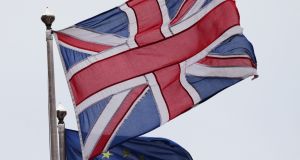 Did Boris Johnson have a Brexit wobble? Certainly, and not just as Craig Oliver – the director of communications for David Cameron – complains in the first of a round of score-settling memoirs from the erstwhile No 10 team. Johnson is an exciting but uncertain political unicyclist, who swerved and side-slipped his way to supporting Vote Leave. If Camp Cameron was surprised to find the great Tory manchild still head-scratching and evoking Eeyore’s depression about the chances of a leave victory while campaigning for it, they were not paying attention to Boris’s mood swings.

When Liam Fox, then in the wilderness, now re-elevated to the outer part of the May inner circle as trade secretary, threw a party early last year dominated by pumped-up Tory leavers, Johnson spent much of his time sighing and hair-ruffling about the referendum – and confided to me (and I guess, several others) that he was still “completely torn” on “this EU thing”.

It did not always suit No 10 to acknowledge the reality – that loyalty to Cameron was skin deep and that aspirations beyond the referendum would nuance how senior Conservatives behaved in the campaign. Ambitious politicians, given an open goal, tend to take a shot at it.

When the wound-licking is done, the more important matter will be what kind of relationship Britain should have with the EU after the divorce. Wolfgang Schäuble, Germany’s powerful but testy finance minister, has just got shirty with the foreign secretary’s blithe suggestion that there was not necessarily a trade-off between the single market and freedom of movement inside the EU. That will not necessarily please Angela Merkel, who has phrased her response to Brexit with deliberate calm. “She knows punishment beatings won’t help get this sorted,” a confidant in the Kanzleramt tells me. Merkel does not remotely like Brexit and believes it a mistake for Britain and Germany. But as a child of the old East Germany, she is keenly aware that elites sounding bitter or resentful about a popular movement is counterproductive.

Absolutists on both sides are reluctant to move on. Yet they must, for the good of Britain and also the wider EU, which is more afflicted by post-referendum turbulence than it can readily admit. Practical inquiry will soon turn to whether Brexit should be of the soft or hard variety . The “softy tendency” wants to retain single market access, or at least as much of it as can be salvaged via trade deals. And while Schäuble is right that the Lisbon treaty links freedoms of movement to single market access, that does not account for the EU’s tendency to state that things are inviolable – and then, under pressure, negotiate on them.

A generous offer on freedom of movement for those with guarantees of work and study places, for instance, would get a better reception in Europe than the hardline anti-immigration suggestion that Fortress Britain needs very few incomers to prosper. Hard Brexit advocates are already staking out their ground: “Some vainly advocate retaining features of EU membership after leaving but this is not practical,” raps the longstanding Tory Eurosceptic Bernard Jenkin.

But the ghosts of pre-EU diplomacy stalk post-referendum Europe. Better to look to the early 19th century and Count Metternich, wheeler-dealing to save the fortunes of Austria by dogged pursuit of détente with France and alignments with Prussia/Russia (“unthinkables” and “impracticals” in their day too), rather than the trumpet blasts of Boris or Jean-Claude Juncker. “Events which cannot be prevented must be directed,” the great Austrian diplomatic fixer once remarked – a lesson for those who have to deliver on the Brexit promise.

Many convinced, outraged, piqued or spuriously confident voices will say that hard Brexit is the decisive way to go. Nigel Farage is already priming his comeback in defence of this proposition. Perversely, it appeals to avowed sceptics in Britain and those in the institutional EU who still believe that putting Britain out in the cold is the best way to cauterise revolt elsewhere. Here is a recipe for deepening animosity. Geography is master of all our fates and post-Brexit, we still have to share a continent.

A gentler methodology requires patience about the pace of negotiations from the British, government and an acceptance in the EU that since Britain is the first big “ex-member state”, its final status will, by definition, be something that has not existed before. The hardest part might not be finding a fudge on freedom of movement, via work permits and a broad deal on student visas – but the right recipe for maintaining trade and cultural links. If soft Brexit’s contours are still vague, it starts with a state of mind, which understands that Brexit needs to be delivered and does not only harp in bad faith on the defeat of remainers, but which also accepts the great jeopardy in leaving the EU, and thus that the process is best undertaken as circumspectly as possible.

It will cause ructions inside the Conservatives, but the least worst option is better than the alternatives

A “Usain Bolt” model, in which a race to trigger article 50 becomes the starting gun for the fastest possible Brexit, will cut off compromises, deepen misunderstandings and leave a sulky UK offshore from a bruised and crosser EU, with practical details of how we will associate with member states dangerously unclear.

The softy tendency must start to build a coalition of support and make its case. Rather more than is reflected by the true believers on either side, many voters shared a dollop of Boris’s vacillation: neither so convinced by the EU’s self-praise that they yearned to stay in it, nor convinced by the “better off out” simplicities of outright Brexiters. The May-Hammond duumvirate needs to start defining what the gentler road to Brexit looks like and outline its benefits. It will cause ructions inside the Conservatives and a wider argument about what Brexit is to mean, but the least worst option is better than the alternatives. Metternich had a natty coinage for that too: “The obvious is always the least understood.” Not for the first time, he was on to something.

• Anne McElvoy is senior editor at the Economist