A freebooting son of Ulster – An Irishman’s Diary on Philip Nolan, Texas, and the filibusters 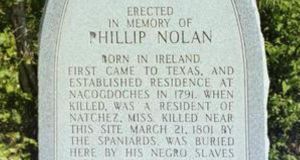 A memorial erected in 1965 in Blum, Texas, to the memory of Philip Nolan (1771–1801), a Belfast-born horse trader, freebooter and one of the earliest filibusters

One of the issues that has divided candidates running in the Democratic primaries is the desirability of eliminating the filibuster from the floor of the US Senate.

As it is presently understood in the US, the filibuster is the tactic which sees senators display acute symptoms of logorrhoea when coming into contact with legislation they deem highly dangerous – or, at least, contrary to the interests of the lobbyists who swarm Capitol Hill. The illness only passes with the death of the Bill.

The filibuster has something of an inglorious history in the United States. The record for the longest intervention in the US Senate is held by the late South Carolina segregationist Strom Thurmond, who rambled on for 24 hours and 18 minutes in an attempt to prevent the passage of the 1957 Civil Rights Act.

In Ireland, the filibuster was a favoured tactic of Parnell and his fellow home rule MPs in the House of Commons.

During a debate on Brexit in September, the leader of the House of Commons, Jacob Rees-Mogg, described Parnell’s obstructionist tactics as an effort “to bung up Parliament”. Given Rees-Mogg’s own propensity for prolixity, and his tendency to “talk out” legislation he finds objectionable, this can only have been meant as high praise.

The original meaning of the English word “filibuster” had more to do with direct action than tedious parliamentary measures. Derived from the Dutch word vrijbuiter, via French (flibustier) and Spanish (filibustero), the filibuster was a freebooter, buccaneer or pirate who sailed the Caribbean on the lookout for treasure-laden Spanish galleons returning from the Indies. By the middle of the 19th century, however, the term filibuster had come to mean those, mostly Anglo-American, adventurers who participated in unofficial expeditions into foreign territories with a view to fomenting an uprising against the authorities.

The Belfast-born horse-trader Philip Nolan, who was operating across the modern-day US states of Texas, Louisiana and Mississippi in the late 1790s, has traditionally been regarded as one of the earliest filibusters. This was then the frontier between the Spanish Empire and the United States – Texas and Louisiana were under Spanish-rule, as was part of Mississippi – and traders changed allegiances depending on which way the wind blowed.

Nolan’s close association with Gen James Wilkinson has given rise to speculation that he was involved in a plot to undermine Spanish rule in Texas. Wilkinson was later implicated in former US vice-president Aaron Burr’s alleged conspiracy to carve out an independent state from territories belonging to modern-day Mexico and the southwestern United States.

Nolan led four trading expeditions into Spanish Texas in the 1790s. In 1791, during his first stay in Texas, he established himself at Nacogdoches. When his goods were confiscated by the authorities, he spent two years living with the Comanche and other Indian peoples.

The Spanish authorities were initially tolerant of Nolan’s activities but became increasingly sceptical as the decade progressed. While the ostensible purpose of his expeditions was to trade goods and round up mustangs for sale in Louisiana and Mississippi, Nolan was also providing vital information to the US government about the region’s geography and fauna. Among his correspondents was Thomas Jefferson, who requested information about Texas’s wild horses and extended an invitation to Nolan to Monticello, his famous plantation in Virginia.

However, Nolan was never to meet Jefferson or visit Monticello. Shortly after his marriage to the daughter of a wealthy planter in Natchez in 1799, Nolan embarked on his fourth and final expedition to Texas at the head of a group of armed men. Arriving in Texas, Nolan and his men built a fort and corrals on a tributary of the Brazos river close to Waco.

By this stage the authorities in Texas regarded Nolan as a subversive, suspecting that his intention was to foment a rebellion in collusion with local Native-Americans. Troops from Nacogdoches were sent to arrest him and laid siege to his fort. Nolan was killed during the skirmish by a random shot to the head in March 1801.

Although there is scant documentary evidence that Nolan was involved in a plot to wrest the territory from the Spanish, Texas commemorates him as a freedom fighter.

Nolan County in west central Texas is named in his memory. Farther east, close to the Nolan River and the town of Blum, a stone memorial in the shape of a headstone beside Highway 174 recalls the Belfast-born horse trader. The inscription suggests that his death “aroused a wave of indignation that led to the independence of Texas”, a reminder that it was pioneers such as Nolan who forced the hands of the smooth-talking politicians and polemicists who dreamed up the idea of Manifest Destiny.

1 David McWilliams: ‘Ireland is three decisions away from being a perfect country’
2 Coronavirus: Parents of new babies to get three extra weeks’ leave
3 US passengers fly into Dublin: ‘I’m here for six days. I guess I’ll have to stay inside’
4 California shuts down again as US coronavirus cases surge
5 Covid-19: 200 to 250 people arriving in Ireland from US daily - Coveney
Real news has value SUBSCRIBE