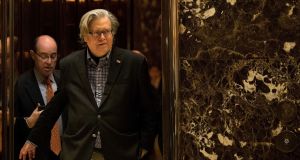 Steve Bannon: Began his career in the military and business before turning to politics and the media. Photograph: Getty Images

By installing Breitbart News executive Steve Bannon and outgoing Republican national committee chairman Reince Priebus to the most senior roles in his White House, Donald Trump will try to ride a two-headed dragon in power.

Bannon represents the provocative outsider who helped Trump tap the electoral forces that swept him to victory and kept him on message in the later stages of the campaign. While Priebus is the establishment insider who will bridge the gap between the Trump White House and Republican Congress he needs to make his policy agenda a legislative reality.

Bannon’s appointment – a man who until August ran a website that peddles racist, misogynist and anti-Semitic rhetoric – as chief strategist and senior counsellor has horrified many in Washington DC and drawn fierce denunciations from Democrats and moderate Republicans alike.

It was a sign that Trump has no intention of abandoning the winning team or formula behind his stunning election victory and that the new Republican president is intent on fulfilling his promise to shake up Washington politics.

Once described by Bloomberg as “the most dangerous political operative in America”, the combative Bannon will be a sounding board for the billionaire businessman, keeping him rooted in the populism that secured the White House, and will likely ensure that the Trump presidency will be as controversial as his campaign.

Bannon (62) began his career in the military and business before turning to politics and the media. 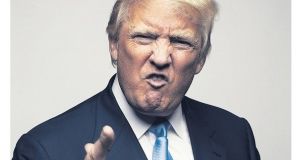 Born into a poor family in the shipbuilding town of Norfolk, Virginia, he joined the US Navy after graduating from college at Virginia Tech and spent years at sea on a destroyer in the Middle East, serving from 1976 to 1983.

Afterwards, he studied for an MBA at Harvard and worked for Wall Street giant Goldman Sachs from 1984 to 1990, leaving to form his own investment bank Bannon & Co which advised on media and film acquisitions. At one point, he picked up a stake in the popular comedy series Seinfeld. By the time he sold his firm in 1998 he was a wealthy man.

He was involved in a Hollywood movie before turning to conservative films celebrating the rise of the hard-right Tea Party, pushing his anti-establishment agenda – a view fomented by his disillusionment with Washington.

“I wasn’t political until I got into the service and saw how badly Jimmy Carter f**ked things up. I became a huge Reagan admirer. Still am. But what turned me against the whole establishment was coming back from running companies in Asia in 2008 and see that Bush had f**ked up as badly as Carter. The whole country was a disaster.”

The late Andrew Breitbart, who founded the far-right Breitbart News in 2007, once called Bannon the Leni Riefenstahl of the Tea Party movement, a reference to the Nazi regime’s filmmaker propagandist. Bannon’s films and his conservative radio talk show made him a darling of the anti-immigrant and white-supremacist circles of the “alt-right” movement.

Bannon took took charge of Breitbart as executive chairman in 2012. The website has shocked with inflammatory headlines such as “Birth control makes women unattractive and crazy” and “Would you rather your child had feminism or cancer?” When white supremacists murdered nine black churchgoers in Charleston, South Carolina last year, the website published an article titled: “Hoist it high and proud: the Confederate flag proclaims a glorious heritage.”

The pugnacious operator has found himself in trouble personally. He was charged with domestic violence against his ex-wife in 1996 but the charges were later dropped. His ex-wife claimed in 2007 divorce papers that he had made anti-Semitic comments and did not want to send their children to a school with Jews, an allegation he has denied.

Breitbart threw its support behind Trump’s candidacy last year. It called Bill Kristol, a conservative critic of Trump, a “renegade Jew”. The association between website and candidate was formally consummated when Trump, in a third reshuffle of his team, picked Bannon to run his campaign with pollster Kellyanne Conway in August.

Trump’s election and Bannon’s appointment means that a man once on the US political fringe will be a short walk away from the Oval Office after January 20th.