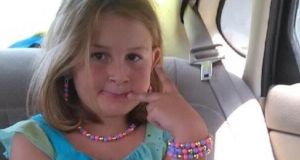 McKayla Dyer, a third-grader at White Pine Elementary School, died after being shot in the chest. Photograph: gofundme

An 11-year-old eastern Tennessee boy was in custody for murder on Monday for shooting and killing an 8-year-old neighbour girl with a shotgun because she would not show him her puppies, authorities said.

The unidentified boy was talking to three girls who were outside the window of his mobile home on Saturday evening and asked one of them if he could see her two new puppies, but the girl refused, according to Jefferson County Sheriff GW “Bud” McCoig.

The boy retrieved his father’s 12-gauge shotgun, shot the girl in the chest from the window, and then threw the weapon outside by the girl’s body, McCoig said.

The girl has been identified as McKayla Dyer, a third-grader at White Pine Elementary School. The boy was in fifth grade at the same school, where counselors were on hand Monday to help the other children deal with the news, McCoig said.

“It is a sad, sad situation,” said McCoig. “We hope this don’t ever happen again.”

McCoig said the girl was unresponsive at the scene, and was pronounced dead after being taken to a hospital. The boy, who was unidentified, was taken into custody at his home.

“She was a precious little girl, she was a mommy’s girl, no matter how bad of a mood you were in she could always make you smile,” McKayla’s mother, Latasha Dyer told ABC affilliate wate.com.

The shooting happened in a trailer park in White Pine, a town of about 2,200 people about 42 miles (68 km) east of Knoxville.

The boy was charged with first-degree murder as a juvenile. A judge at a detention hearing on Monday determined that the boy will remain in a juvenile facility in Knoxville.

The boy will appear in court again on October 28th, at which time the judge may decide whether he should be tried as a juvenile or as an adult.