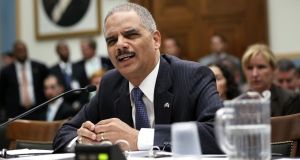 US attorney general Eric Holder testifies during a hearing before the House Judiciary Committee on oversight of the US department of justice yesterday. Photograph: Alex Wong/Getty Images

The Obama administration came under more intense fire over the secret subpoenas of phone records of Associated Press journalists and the targeting of conservative political groups by the US tax authorities, the Internal Revenue Service.

US attorney general Eric Holder was grilled by a House committee over the secret seizure of phone records belonging to AP reporters and editors by the justice department as part of an investigation into the leaking of information that led to news stories about the CIA’s counter-terrorism efforts in Yemen last year.


Phone records
Mr Holder, who had recused himself from the justice department inquiry because he had been interviewed about the leaks, said that he didn’t know why the swoop on AP phone records was so broad.

“I’m not aware of why the subpoena was constructed the way it was,” he told the House of Representatives judiciary committee.

Mr Holder was grilled by both Democrats and Republicans over the seizure of the phone records in a tense committee hearing on Capitol Hill.

“It seems to me the damage done to a free press is substantial and will continue until corrective action is taken,” said Democratic congresswoman Zoe Lofgren from California.

“I think this is a very serious matter that concerns all of us, no matter our party affiliation.”

Mr Holder pleaded ignorance on the justice department inquiry but told the committee that the department would explain its actions in more detail when the investigation ends. “I do think at the conclusion of this matter, given the attention it has generated, that some kind of after-action analysis would be appropriate,” he said.

Mr Holder said that an investigation into whether the IRS broke any criminal laws by applying special scrutiny to Tea Party and other conservative political groups would not be limited to Ohio where the suspected conduct by the tax authorities originated.

He repeated that the conduct of the IRS was “outrageous” a day after he announced the investigation by the justice department and the FBI into the behaviour of the tax authorities.

In heated exchanges at the hearing, Mr Holder clashed with Republican congressman Darrell Issa from California whom he accused of “shameful” and “unacceptable” behaviour in not allowing him to speak.

House speaker, Republican John Boehner, said the targeting of conservative groups seeking tax exemption status as non-profit entities was grounds for some IRS employees to be fired. “The IRS has admitted to targeting conservatives, even if the White House continues to be stuck on the word ‘if’,” Mr Boehner said at a press conference.

Mr Boehner said that someone had made “a conscious decision to harass and hold up these requests for tax exempt status.”

President Obama has described the IRS targeting as “outrageous”, “intolerable” and “inexcusable”, saying there was “no place for it” in his administration. He has declined to say what action should be taken pending a further report by the US inspector general, fuelling political wrangling on the issue.