US and Cuba to reopen embassies after 54-year diplomatic hiatus

Hailing ‘historic step’, Obama to send John Kerry to raise US flag in Havana this summer 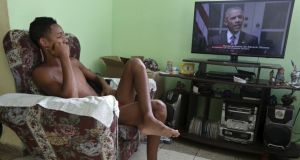 A man watches a television broadcast of US president Barack Obama speaking, in Havana on Wednesday. Mr Obama said the US would increase contacts with the Cuban people and engage with the Havana government, civil society and ordinary Cubans. Photograph: Enrique de la Osa/Reuters

The United States and Cuba have agreed to reopen embassies in each other’s capitals, officially restoring diplomatic relations more than a half century after the countries broke off ties during the cold war.

The reopening of relations marks the culmination of six months of negotiations between Washington and Havana after President Barack Obama announced in December plans to end five decades of enmity with the communist island nation 145km from the US mainland.

Embassies will reopen in the countries on July 20th. US secretary of state John Kerry will travel to Havana to raise the American flag over the new embassy later this summer, Mr Obama said.

Speaking from the White House Rose Garden, the US president noted how in 1961, the year he was born, the then US president Dwight Eisenhower broke off relations with Cuba in response to increased tensions with the revolutionary government of Fidel Castro.

“This is a historic step forward in our efforts to normalise relations with the Cuban government and people and to begin a new chapter with our neighbours in the Americas,” said Mr Obama.

Cuban president Raul Castro said he was “pleased” to confirm that his country will restore diplomatic ties with the US.

In a letter to Mr Obama, he said that Cuba was “encouraged by the reciprocal intention to develop respectful relations and co-operation between our people and governments.”

Flanked by vice-president Joe Biden, Mr Obama said the reopening of the embassy was “not merely symbolic” – the US would increase contacts with the Cuban people and engage with the Havana government, civil society and ordinary Cubans.

Noting the “very real, profound differences” between the countries in the past, Mr Obama stressed that, despite the restored relations, the governments would “continue to have some very serious differences”.

“That will include America’s enduring support for universal values like freedom of speech and assembly and the ability to access information and we will not hesitate to speak out when we see actions that contradict those values,” he said.

“However, I strongly believe that the best way for America to support our values is through engagement.”

Senior American diplomat Jeffrey DeLaurentis hand-delivered a letter to the Cuban foreign ministry in Havana from the White House on Wednesday morning about the reopening of the embassies.

The US government has since December eased travel restrictions to Cuba and permitted new economic ties. Mr Obama met Cuban president Raul Castro during a summit in Panama, the first time leaders of the two countries had met in more than 50 years.

In May the US state department removed Cuba from a list of states that sponsor terrorism, 23 years after it was added to the list amid accusations that it supported terrorist groups in Latin America. The move was a key step in the renewal of diplomatic relations.

Mr Obama urged Congress to lift the trade embargo that prevents Americans from travelling and conducting business in Cuba.

“Why should Washington stand in the way of our people?” he said. “Yes, there are those who want to turn back the clock and double down on a policy of isolation but it is long past time for us to realise that this approach doesn’t work. It hasn’t worked for 50 years.”

The president urged US lawmakers to listen to the Cuban and American people who oppose economic sanctions against the country.

Republican congresswoman Ileana Ros-Lehtinen of Florida, a Cuban-American opponent of Mr Obama’s diplomatic move and the Castro regime, said that the Cuban people were “no freer today” than when the president made his historic announcement in December.

“We are giving concessions to Castro. President Obama doesn’t know how to make any kind of a deal,” she told news channel MSNBC.

“We have gotten nothing in return and the Castro regime gets a lot of legitimacy that they have not earned.”