Republican presidential nominee Donald Trump makes his pitch to black voters at a church in Detroit, Michigan, in an effort to peel away minority support from his Democratic rival. 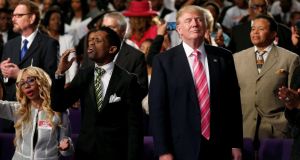 Donald Trump vowed to fix the “many wrongs” facing African-Americans as he made a visit to a predominantly black church in Detroit on Saturday.

The Republican presidential candidate called for a “civil rights agenda for our time” as he addressed the congregation at the Great Faith Ministries International. The tycoon swayed to songs of worship, read scripture, and donned a Jewish prayer shawl during the visit.

Although there are still two months until the election, early voting begins next week in North Carolina, and it will be a test of whether his recent reaching out to non-white groups is translating into support.

Mr Trump has stepped up his attempts to appeal to minority voters in recent weeks as he tries to expand his appeal beyond his Republican base.

The visit was his first to a black church, a rare appearance in front of a largely minority audience for a candidate who typically attracts overwhelmingly white crowds.

Mr Trump was introduced by Bishop Wayne T Jackson, who warned that he was in for something different.

“This is the first African-American church he’s been in, y’all!” he said.

While protesters were a vocal presence outside, Mr Trump made a pitch inside for support from an electorate strongly aligned with Democrat nominee Hillary Clinton.

“Our nation is too divided,” he said. “We talk past each other, not to each other. And those who seek office do not do enough to step into the community and learn what’s going on.”

Striking a rare unifying tone, he said: “I’m here today to learn so that we can together remedy injustice in any form.”

Mr Trump also praised the black church as “the conscience of our country” and said the nation needs “a civil rights agenda for our time”.

“I fully understand that the African-American community has suffered from discrimination and that there are many wrongs that must still be made right,” he said.

African-American community leaders, in particular, have dismissed Mr Trump’s message as intended mostly to reassure white voters that he is not racist. – AP