Kosovo PM at odds with US over Serbia tariff plan 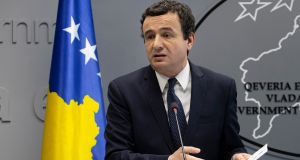 Kosovo’s prime minister Albin Kurti has pledged to scrap punitive tariffs on imports from Serbia if it also makes concessions, in a move that has drawn strong criticism in Pristina, Belgrade and Washington.

In a letter published on Monday, Mr Kurti told US president Donald Trump that Kosovo would lift a 100 per cent tax on raw materials from its neighbour on March 15th “as a gesture of diplomatic goodwill and to signal our commitment to working closely with the United States on the dialogue with Serbia”, which refuses to recognise the independence of its former province.

Mr Kurti said Pristina would end tariffs on all other Serbian imports on April 1st, if Belgrade lifted trade barriers for Kosovo and halted efforts to stop it joining international organisations and gaining wider recognition as a sovereign state.

If Serbia failed to reciprocate, however, the tax would be reimposed on June 15th, Mr Kurti warned.

EU-brokered talks between Kosovo and Serbia have been frozen since Pristina introduced the import tax in November 2018.

When Mr Kurti unveiled the plan last week it was welcomed by the EU but swiftly denounced by Richard Grenell, Mr Trump’s special envoy for Serbia and Kosovo and the acting head of US national intelligence.

“We do not support prime minister Kurti’s half measure. Our position is quite clear: the tariffs must be completely dropped. Mr Kurti is making a serious mistake,” Mr Grenell wrote on Twitter.

Mr Grenell argues that the tariffs hamper closer economic ties between Serbia and Kosovo that would benefit their people and help establish normal bilateral relations.

In recent weeks, Mr Grenell has brokered deals to improve road and rail links between Belgrade and Pristina and to relaunch flights between the two capitals after a break of more than 20 years. It is not clear when the transport upgrades will be operational, however.

Analysts say the US push to break the Kosovo-Serbia impasse suggests that Mr Trump may hope to secure a foreign policy “win” during his bid for re-election this year by facilitating a historic settlement between the Balkan neighbours.

Mr Grenell has held several meetings with, and earned voluble praise from, Kosovo’s president Hashim Thaci, who with Serbian counterpart Aleksandar Vucic has previously suggested that an exchange of territory could be part of a final deal between the two states.

The US envoy says he will back any agreement the two states reach, but Mr Kurti – who opposes any border changes – made clear in his letter to Mr Trump that his government, and not Mr Thaci, would take “full and exclusive charge” of negotiations.

Mr Kurti faces criticism at home from some parties that want to maintain the tariffs and others that want to drop them immediately to satisfy Washington, while Mr Vucic has called his proposal “a hoax”.

1 Taoiseach dramatically sacks Barry Cowen as minister over drink-driving controversy
2 Miriam Lord: What the actual...? Martin blooded as Taoiseach after he wields axe on Cowen
3 Covid-19: Ireland likely faces ‘imminent second wave’ due to reopening, experts warn
4 Three visitors investigated by Garda after refusing to fill in locator form
5 Cowen ‘surprised and disappointed’ after being sacked on the phone by Micheál Martin
Real news has value SUBSCRIBE