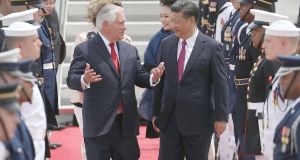 US secretary of state Rex Tillerson warned Russia to “carefully consider” its continued support for the Assad regime, amid growing signs that the United States is weighing military options in Syria.

In the strongest warning yet to Russia over its support for Syrian president Bashar al-Assad from the Trump administration, Mr Tillerson said that the US was considering an “appropriate response” for the chemical attack.

Asked if President Assad should relinquish power, Mr Tillerson replied: “Those steps are under way.”

“There is no doubt in our minds . . . that the Syrian regime are responsible for this attack. It is very important that the Russian government consider carefully their continued support for the Assad regime.”

His comments – delivered in Mar-a-Lago in Florida as Chinese president Xi Jin Ping arrived in the United States for a two-day visit – came a day after US president Donald Trump said he had changed his mind about Syrian president Bashar al-Assad following Tuesday’s chemical attacks in the Idlib province of Syria, warning that “these heinous actions by the Assad regime cannot be tolerated”.

Mr Trump had previously indicated that he was opposed to intervention in Syria. But on Wednesday he said that “many many lines” had been crossed by the chemical attack. While Mr Trump did not mention Russia on Wednesday, both Mr Tillerson and the United States’ ambassador to the United Nations have criticised Russia’s backing for the Syrian regime in the last two days.

Turkey confirmed on Thursday that chemical weapons were used in the attack that killed at least 72 people, a charge denied by President Assad. Russia has criticized “groundless accusations” about the Syrian government’s involvement, arguing that the aerial attacks hit chemical factories.

As Chinese premier Xi Jin Ping arrived in Mar-a-Lago, Mr Tillerson said the White House was hoping that China “will find ways to exercise influence over North Korea”, warning of the grave nuclear threat posed by the state. He also said that America would collaborate on trade with China, but only in a way that “prioritises the economic well being of the American people.”

“The chief goal of our trade policies is the prosperity of the American worker,” he said.

As the US president left Washington for Florida, on Capitol Hill the Republican party moved to change long-standing rules governing the election of Supreme Court justices, after Democrats blocked the appointment of President Trump’s nominee for the supreme court Neil Gorsuch.

In a dramatic move, Senate majority leader Mitch Mc Connell moved to invoke the so-called “nuclear option” which would allow supreme court nominees to be elected by a simple majority rather than the 60-40 majority currently required.

The rule change is likely to guarantee the appointment of Neil Gorsuch on Friday, but it could mark a significant change to the way the US Senate operates, allowing important decisions to be taken by a simple majority, rather than the 60-40 tradition.

Both parties sought to blame each other for the stand-off, with Republicans pointing out that it was Democrats who first changed the rules in 2013 when then senate majority leader Harry Reid invoked the “nuclear option” for executive appointments, but not for Supreme Court justices.

But Democrats, still furious at Republicans refusal to consider former president Obama’s nominee to replace Antonin Scalia at the court who died just over a year ago, laid the blame at the door of Republicans. Senate minority leader Charles E Schumer, the top-ranking democrat in the Senate, warned that the “consequences for the Senate and for the future of the Supreme Court will be far reaching”.

The decision by Mr McConnell to switch to a majority vote was taken to end the filibuster  – a delaying tactic often used in the Senate by the minority party to block a procedure.

Mr Gorsuch, a 49 year-old judge from Colorado, was proposed by Mr Trump in January to fill the seat vacated by Scalia’s death more than a year ago. But despite what was perceived as a relatively positive performance at his confirmation hearings, only three Democrats voted to back him, with most concerned that he will bring a conservative agenda to the court.

Meanwhile, Congress was left reeling by the surprise decision by the chair of the House Intelligence Committee to recuse himself from the ongoing investigation into Russian involvement in the election.

Devin Nunes, the top-ranking Republican on the House Intelligence Committee, had become embroiled in controversy after it emerged that he secretly visited the grounds of the White House to receive information he said showed that members of the Trump administration had been inadvertently surveyed by US intelligence services.

Mr Nunes, who was a member of Mr Trump’s transition team, had resisted calls by Democrats to step down. But in a surprise move on Thursday he confirmed he was moving aside from chairing the investigation following confirmation that he is under investigation by the House ethics committee.

In a strongly-worded statement, Mr Nunes dismissed the charges as “entirely false” and “politically motivated,” blaming “several left-wing activists” for filing complaints with the Office of Congressional Ethics.