Prince was to meet doctor over painkillers addiction - report 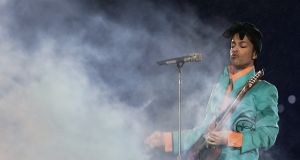 US musician Prince performing during half-time at Super Bowl XLI in Miami. The body of music superstar Prince was found one day before a doctor was to meet him to help end an addiction to painkillers, according to a new report. File photograph: Jeff Haynes/AFP/Getty Images

The body of music superstar Prince was found one day before a doctor was to meet him to help end an addiction to painkillers, the Minneapolis Star Tribune reported on Wednesday, citing the doctor’s lawyer.

California doctor Howard Kornfeld, described in the report as a national authority on opioid addiction treatment, was contacted by Prince representatives on April 20th because the musician “was dealing with a grave medical emergency”, the newspaper reported, citing William Mauzy, a Minneapolis attorney it said was working with the Kornfeld family.

Mr Kornfeld, who runs Recovery Without Walls, an outpatient clinic in Mill Valley, California, was unable to meet with Prince on the day the musician was found dead at the age of 57 at his home, Paisley Park, in a Minneapolis suburb, the paper said.

Mr Kornfeld had planned to fly out the following day, the paper said.

However, the doctor’s son, Andrew Kornfeld, arrived at Paisley Park on the morning of April 21st and was one of three people there when Prince’s body was found in an elevator, the paper said. Andrew Kornfeld had called 911.

Neither the doctor nor the lawyer responded to Reuters requests for confirmation of the report.

The hope was that Prince would agree to go to California for care, which would include around-the-clock nursing support, the paper said.

Prince’s cause of death remains undetermined and it could be weeks before results are released from an autopsy.

Police have said they found no signs of suicide or obvious trauma in Prince’s death.

The report comes amid allegations Prince was a cocaine user who could not control his drug habit, following newly released police call records.

A woman contacted Carver County sheriff’s office in Minnesota in June 2011 to report that she was “concerned about Prince’s cocaine habit”.

The caller, whose name has not been released, claimed Prince had “advised her last year in Germany that he cannot control his habit and she was advised to report it”.

Police told the woman that because the information was a year old and “she did not specify Prince is in immediate danger” the incident was closed, the documents show.