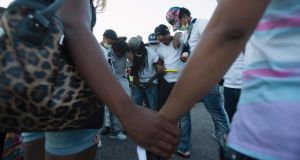 US President Barack Obama has called on police to respect demonstrators in Ferguson, Missouri, in an attempt to defuse tensions after four nights of often-violent protests over the police killing of an unarmed black teenager.

“There is never an excuse for violence against police or for those who would use this tragedy as a cover for vandalism or looting,” Mr Obama said in televised remarks.

“There’s also no excuse for police to use excessive force against peaceful protesters or to throw protesters in jail for lawfully exercising their first amendment rights,” he told the press from Edgartown, Massachusetts, near where he is vacationing with his family.

Since Sunday, there have been peaceful vigils and demonstrations - with protesters holding their hands in the air and chanting “hands up, don’t shoot” - as well as episodes of looting, vandalism and violence.

Missouri lawmakers urged Governor Jay Nixon to step in today and change the police tactics used in Ferguson, which, they said, were causing an escalation of violence.

“My goal has been to try to move out some of the military responses that they have been embracing and see if we can’t get back to good, solid police work that keeps the protesters safe,” US Senator Claire McCaskill said during a visit to Ferguson today.

Mr Nixon told community members at a church near Ferguson that he would make operational shifts so that people would feel a different tone from police on the streets. He did not specify what steps would be taken.

Ferguson Police Chief Thomas Jackson told reporters the police would work to “facilitate” protests and not escalate tensions, but added that police had to react to crowds that turn violent.

The tactical chief of the police operations at the protests has been the St. Louis County SWAT commander, he said.

Authorities also said they might rethink their decision to withhold the name of the police officer who was involved in the shooting.

Protesters have said a lack of transparency by police investigating the incident - including the refusal to release the officer’s name - had stoked already-high tensions.

They have also called for St. Louis County Prosecuting Attorney Bob McCullough to be removed from the case.

Early on Thursday, a member of the Anonymous hacker activist collective, using the Twitter name @TheAnonMessage, tweeted a name, alleging it was the police officer who shot Brown.

Police and prosecutors strenuously denied that the person named was the officer involved, saying he was not even a member of the St. Louis County Police Department or the Ferguson Police. Later, another collective member, tweeting as @OpFerguson, said the name was incorrect.

Hackers have periodically disrupted the Ferguson police website and other local government sites throughout the week.

The shooting and protests have shed a spotlight on race issues in the highly segregated city of St. Louis and its suburbs.

Ferguson has seen a stark demographic shift in recent decades, going from mostly white to mostly black. About two-thirds of the town’s 21,000-strong population is black. Still, on a police force of 53, just three officers are black.

Civil rights groups have complained in the past that police in St. Louis County racially profiled blacks, arrested a disproportionate number of blacks and had racist hiring practices.

Amnesty International called today for a thorough investigation into the shooting of Brown, as well as the tactics used against protesters.

The US Department of Justice, the FBI and the St. Louis County prosecutor’s office are all investigating Brown’s death.

Police have said that Brown struggled with the officer who shot and killed him. The officer involved in the shooting was injured during the incident and was treated in hospital for swelling on the side of his face, they said.

But some witnesses have said that Brown held up his hands and was surrendering when he was shot multiple times in the head and chest.