The man who killed two NYPD officers in an ambush had a long criminal record and regularly posted anti-government rants on social media. Video: Reuters 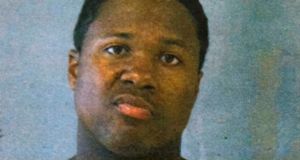 Ismaaiyl Brinsley (28) is seen in an undated picture provided by the New York Police Department on December 21, 2014. 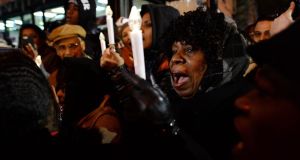 People sing during a candlelight vigil for two police officers who were killed in Brooklyn, New York. The two officers, Wenjian Liu and Rafael Ramos, were gunned down while sitting in their car by Ismaaiyl Brinsley, who later took his own life when confronted by police. Photograph: Justlin Lane/EPA

The gunman who murdered two New York City police officers in their squad car had a long criminal record, a hatred of police and the government and an apparent history of mental instability that included a suicide attempt a year ago, it has emerged.

Moments before opening fire, Ismaaiyl Brinsley approached people in the street in Brooklyn and asked them to follow him on Instagram, then told them “Watch what I’m going to do”, chief of detectives Robert Boyce said.

The portrait of the Brooklyn-born gunman emerged as big-city police forces and union leaders around the US warned officers to change their routines and insist on extra back-up a day after Brinsley carried out what he portrayed online as retaliation for the killings of black men by white police officers.

Brinsley was black and the murdered officers were Asian and Hispanic.

The killings come at a tense time when police nationwide have been criticised for months for their tactics following Eric Garner’s death after being put in a chokehold by a New York officer and the fatal shooting of Michael Brown (18) in Ferguson, Missouri.

Protests have erupted in recent weeks after grand juries declined to charge the white officers involved.

Investigators were trying to determine if Brinsley, who killed himself after the murders, had taken part in any protests over the deaths of Mr Brown and Mr Garner, whose names he invoked in his online threat, or simply latched on to the cause for the final act in a violent rampage.

They said he travelled frequently between America’s South and New York, where he fathered a child in Brooklyn, and had been in the city earlier in the week.

Brinsley (28) had at least 19 arrests in Georgia and Ohio, spent two years in prison for gun possession and had a troubled childhood so violent that his mother was afraid of him, police said.

He ranted online about police and the government and expressed “self-despair and anger at himself and where his life was,” Mr Boyce said.

Mr Boyce said Brinsley’s mother believed he had undiagnosed mental problems and may have been on medication at some point, but detectives were still trying to determine if he had a mental illness.

On Saturday afternoon Brinsley approached a squad car from behind in Brooklyn’s Bedford-Stuyvesant neighbourhood and fired four shots, killing officers Rafael Ramos and Wenjian Liu. He then ran into an underground station where he killed himself.

Hours earlier he had shot and wounded his ex-girlfriend at her home outside Baltimore, then made threatening posts online, including a vow to put “wings on pigs” and references to the Brown and Garner cases.

Baltimore police warned the New York force that Brinsley was in the city and bent on violence, but New York police were still getting the word out when Brinsley struck.

The killings dramatically escalated tensions that have simmered for months over police killings of blacks.

The siege mentality was evident in several memos circulating among the rank and file at the 35,000-officer New York Police Department, the largest in the US.

A union-generated message warned police officers that they should respond to every radio call with two cars - “no matter what the opinion of the patrol supervisor” - and not make arrests “unless absolutely necessary”.

The president of the detectives union told members in a letter to work in threes when on the street, wear bulletproof vests and keep aware of their surroundings.

“Cowards such as yesterday’s killer strike when you are distracted and vulnerable,” the letter said.

Another directive warned officers in Newark, New Jersey, not to patrol alone and to avoid people looking for confrontations. At the same time, a memo from an NYPD chief asked officers to avoid fanning rage by limiting comments “via all venues, including social media, to expressions of sorrow and condolence”.

“It’s a reflection that the community cares about the cops,” said Mr Bratton.

Brooklyn Borough president Eric Adams also visited the memorial, calling on protest organisers to “hold off on any type of protest until these officers are laid to rest in a peaceful manner”. Mr Ramos’ family also appealed for peace in the days ahead.

His cousin Ronnie Gonzalez said the family has already forgiven the gunman. “He’s in the hands of God now,” he said. “We don’t believe in vengeance; we just forgive.”

At an appearance with the Rev Al Sharpton, a prominent civil rights activist, Mr Garner’s mother expressed her dismay over the killings of the officers.

“I’m standing here in sorrow about losing those two police officers. That was definitely not our agenda,” Gwen Garner said.

“We are going in peace, and anyone who’s standing with us, we want you to not use Eric Garner’s name for violence because we are not about that.

“These two police officers lost their lives senselessly and our condolence to the family and we stand with the families.”

Meanwhile a neighbour of Brinsley’s ex-girlfriend told of hearing screams coming from the apartment and saw her with a gunshot wound.

Yevette Seay said she called emergency services when Shaneka Thompson (29) banged on her door for help after being shot.

Police say Brinsley shot her in the stomach and then went to New York, where he murdered the police officers.

Ms Thompson is in a critical condition at a Baltimore hospital.

Ms Seay said she told Ms Thompson she was calling the police and to hang in there.