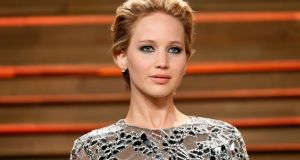 Oscar-winning actor Jennifer Lawrence has said that she’s had it with trying to be “adorable” when it comes to sexism in Hollywood and equal pay for women.

In an attack on the Hollywood wage gap on Tuesday, the Hunger Games star said that in the past she worried about being labelled a spoiled brat when negotiating movie deals.

In an essay for the Lenny newsletter produced by writer and director Lena Dunham, the actor said that men do not have that problem.

Lawrence (25), who according to Forbes was the world’s highest-paid film actress last year, with an estimated $52 million in earnings from movies and endorsements, found out through leaked Sony Pictures emails that she had been paid millions less than her three male co-stars in the 2013 movie American Hustle.

“When the Sony hack happened and I found out how much less I was being paid than the lucky people with dicks, I didn’t get mad at Sony.

“I got mad at myself. I failed as a negotiator because I gave up early,” Lawrence wrote.

Lawrence, who won an Academy Award in 2013 for her role in Silver Linings Playbook, said she did not want to come across at the time as difficult or spoiled, “until I saw the payroll on the internet and realised every man I was working with definitely didn’t worry about being ‘difficult’ or ‘spoiled.’”

While Lawrence may be the biggest Hollywood earner among women, she came nowhere near the estimated $80 million pay day for Robert Downey Jr, who was the biggest earner overall, according to Forbes.

Her essay on Tuesday, titled Why Do These Dudes Make More Than Me?, reflects a more combative attitude by Hollywood’s biggest female stars on the issue.

“I’m over trying to find the ‘adorable’ way to state my opinion and still be likable! . . . Jeremy Renner, Christian Bale, and Bradley Cooper all fought and succeeded in negotiating powerful deals for themselves.

“If anything, I’m sure they were commended for being fierce and tactical, while I was busy worrying about coming across as a brat and not getting my fair share,” she wrote.

Meryl Streep told the BBC last week that she too gets paid less than her male co-stars, while Boyhood actor Patricia Arquette used her Oscar acceptance speech in February to demand wage equality for all women.