Winner planning to pay off mortgage and donate money to charity 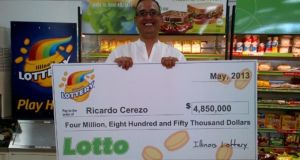 Mr Cerezo was presented on Wednesday with a cheque for $4,850,000 at the 7-Eleven where he originally purchased the ticket. After taxes, Mr Cerezo will receive $3,395,000. Photograph: Illinois State Lottery.

A man whose family was due to be evicted from their US home struck lucky this week when he claimed a $4.85 million (€3.76 million) winning lottery ticket he had stored in a glass cookie jar months previously.

Ricardo Cerezo (44) bought the winning Illinois State Lottery ticket at a petrol station in Geneva, Illinois, in February and placed it along with several other tickets in a jar which had been bought for him by his recently deceased 14-year-old daughter.

Savannah Cerezo - who died last August following a sudden illness - had purchased the cookie jar a few months before she died. The jar was subsequently used to store lottery tickets and keepsakes of her, Mr Cerezo told NBC Chicago.

The family home was on the brink of foreclosure when, prompted by his wife to clear out the jar, Mr Cerezo took the tickets to a nearby petrol station. The eighth ticket he checked had the winning numbers.

“When I realised we had all six numbers it was that shocking moment of ‘Whoah could this really be?’” he told a press conference after collecting his winnings.

He said he called his son over to double check the numbers after which he said he said “Yep, it looks like a winner”

It was only later that Mr Cerezo realised how much he had won.

“The honest first emotion was mammoth regret. And regret again because our youngest wasn’t here to enjoy this,” Mr Cerezi said.

He was told at a foreclosure hearing to find a new home or face eviction just three months earlier.

“That was on February 12th, so we were sitting on $4 million at that time in this jar,” he said. “We will have our home paid off,” Mr Cerezo told a press conference.

The Cerezos are planning to pay bills, pay off their mortgage and share some of their winnings with their son and daughter. They also plan to contribute to charity. “It is very important to us that we help others with this money,” Mr Cerezo said.