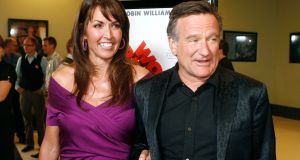 Actor Robin Williams had been suffering from a debilitating brain disease in the year leading up to his suicide in 2014, his widow Susan Schneider Williams said. Photograph: Fred Prouser/Files/Reuters

Actor Robin Williams had been suffering from a debilitating brain disease in the year leading up to his suicide in 2014, his widow said in a magazine interview published Tuesday .

The remarks by Susan Schneider Williams were her most detailed description yet of how the Academy Award-winning actor and comedian had struggled before he was found dead in his home in Tiburon, California, north of San Francisco, in August 2014. He was 63.

“It was not depression that killed Robin,” she told People. “Depression was one of let’s call it 50 symptoms, and it was a small one.”

Susan Schneider Williams gave the magazine an account of her late husband’s struggle with Lewy body dementia, the second-most common type of progressive dementia after Alzheimer’s disease. The disease, which is difficult to diagnose, causes a progressive decline in mental abilities, with hallucinations and muscle rigidity.

“I’ve spent this last year trying to find out what killed Robin,” Susan Schneider Williams said in the interview. “To understand what we were fighting, what we were in the trenches fighting. And one of the doctors said, ‘Robin was very aware that he was losing his mind and there was nothing he could do about it.’’’

The disease started taking its toll on Robin Williams in the last year before his death, with heightened levels of anxiety, delusions and impaired movement. “They present themselves like a pinball machine,” Susan Schneider Williams said, referring to the symptoms. “You don’t know exactly what you’re looking at.”

The actor’s symptoms worsened in the months leading up to his death. He experienced crippling anxiety attacks, a “miscalculation” with a door that left his head bloodied, and muscle rigidity. And yet still his team of doctors could not pinpoint exactly what was wrong.

Susan Schneider Williams said last year shortly after the actor’s death that he had been suffering from the early stages of Parkinson’s disease. But in the People article she said that doctors later discovered the Lewy body dementia when they performed an autopsy.

Lewy body dementia is frequently confused with Parkinson’s or Alzheimer’s disease. The symptoms can overlap, and many health care professionals remain unfamiliar with the disorder. About 1.3 million people have Lewy body dementia.