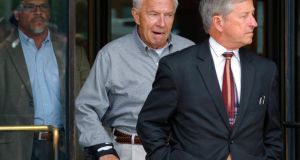 Jackie Bulger (centre), brother of accused mob boss James “Whitey” Bulger, leaves the US federal courthouse at the conclusion of the first day of the trial in Boston, Massachusetts. Photograph: Brian Snyder/Reuters

John McIntyre was working as an informant for US law enforcement agencies following an arrest for drink-driving when James “Whitey” Bulger lured him to a south Boston house in the autumn of 1984, a Boston court has been told.

McIntyre arrived with a case of beer, believing he was going to be attending a party.

The sequence of events that allegedly followed was outlined in graphic detail yesterday by federal prosecutor Brian Kelly at the opening of Bulger’s trial, one of the most anticipated US criminal cases of recent times.

The 83-year-old Boston man – whose story inspired the gangster played by Jack Nicholson in the 2006 movie The Departed – is accused of participating in 19 murders and racketeering as head of one of the US’s biggest crime gangs while working as an informant for the FBI for almost two decades.

The former Alcatraz inmate had eluded capture as a fugitive for 16 years until he was arrested in California in 2011.

Illegal activities
“It is a case about organised crime, public corruption and all sorts of illegal activities ranging from extortion to drug-dealing to money laundering to possession of machine guns to murder . . . 19 murders,” Mr Kelly told the jury of eight men and four women.

One of those murders, he said, was of John McIntyre, an experienced sailor and IRA sympathiser who had helped transport weapons, including guns from Bulger’s gang, on a boat, the Valhalla. The ship was destined for the Provisional IRA but was intercepted by the Irish authorities.

A tip-off by McIntyre to his police handlers had led to the seizure of 36 tonnes of marijuana on another boat, the Ramsland, a shipment organised by Bulger’s gang. Bulger suspected him of being an informer, said Mr Kelly.

When McIntyre arrived at the house in 1984 he found Bulger pointing a gun at him. McIntyre was chained to a chair and interrogated by Bulger until he admitted his role as a police informant, the prosecutor told the court.

Shot dead
He said McIntyre was then brought down to the cellar where Bulger tried to strangle him with a rope. But the rope was too big and only made McIntyre gag. Bulger asked him: “Do you want one in the head?” McIntyre replied: “Yes please.”

Bulger shot him dead and McIntyre was buried in the dirt floor of the cellar, the jury was told.

Mr Kelly told the court the case was about a group of criminals who “ran amok” in Boston during the 1970s, 1980s and 1990s, led by Bulger, a mobster who “did the dirty work himself – a hands-on killer”.

Mr Kelly claimed that Bulger was behind another murder at the East 3rd Street house – the killing of Arthur “Bucky” Barrett, who had a “fondness for stolen jewellery”. Before killing him, Bulger joked to his side-kick Kevin Weeks that Barrett was “going downstairs to lie down a bit”, Mr Kelly told the court.

Bulger appeared before Judge Denise Casper in the John Joseph Moakley Courthouse in Boston dressed in a long-sleeved green T-shirt and jeans. Over his right shoulder in the public gallery was his brother Jackie. Over his other shoulder were some of the relatives of the murder victims.

A product of the predominantly Irish-Catholic housing projects of south Boston, Bulger has pleaded not guilty to all 32 counts facing him in a trial at the US district court that is expected to last months.

His lawyer, JW Carney, said Bulger ran an “unbelievably lucrative criminal enterprise” comprising illegal gambling, loan-sharking, extortion and drug trafficking – admitting the gangster’s involvement in the drugs trade for the first time – but he was never an informant for the rogue FBI Boston agent John Connolly.

“James Bulger is of Irish descent. The worst thing an Irish person could consider doing is becoming an informant because of the history of the Troubles in Ireland. That was first and foremost why James Bulger was never an informant against people.”

Tip-offs
Mr Carney said Bulger paid corrupt law enforcement agents to be tipped off about wiretaps, searches and possible charges, but he never passed on information about others.

He warned that the witnesses expected to detail the murders – Kevin Weeks, hitman John Martorano and Bulger’s former right-hand man, Stephen Flemmi – were unreliable as they had received reduced sentences for testifying. Martorano is serving a reduced sentence of 12 years after admitting to 20 murders between 1965 and 1982. This was a “pretty good recipe to get testimony but it is an unreliable recipe to get the truth”, said Mr Carney.