Contents of Bush library seem an attempt to rewrite history

US Letter: Anyone hoping for a sign of remorse for policy choices won’t find it in Dallas 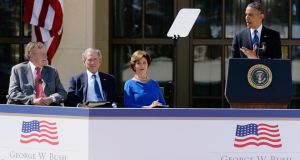 People sit around a fountain basking in the Texan sunshine as a sculptor chisels the names of the board of directors into a stone at the entrance of the George W Bush Presidential Library and Museum.

This is the fourth day the library has been open to the public and already thousands of people have travelled to Dallas to visit the monument to one of the US’s most controversial presidents.

The majestic entrance to the building feels like a place of reflection, where after a tour visitors can ponder the divisive decisions of the 43rd president of the US as he faced them.

One exhibit in this intriguing museum is an edited video aimed at showing the lighter side of Bush – the self-deprecating joker who liked to fool about with his daughters and staff. The video includes a clip of a famous speech by his wife, Laura. She said she was working as a librarian when she met Bush and joked of the unlikelihood that she would have met him in a library.

For a man not known for his mighty intellect and remembered more for his mangling of the English language in speeches, the thought of Bush having a library named after him does seem ridiculous.

Unsurprisingly, the former president was the butt of many jokes before the library opened on May 1st. Comedian Conan O’Brien mocked, saying the library had “millions of books, articles and documents, and if you go, you can be the first to read them”.

Satirist Stephen Colbert said the library opened on the 10th anniversary of Bush’s notorious “mission accomplished” speech when he landed on a US aircraft carrier to declare the conflict in Iraq over. This meant the library would be finished in “another 8½ years”, Colbert quipped.

Former US president Bill Clinton said at the library’s dedication that the museum was “the latest, grandest example of the eternal struggle of former presidents to rewrite history”. He may have been joking but the museum is filled with exhibits that attempt to write history in a way that tries to protect Bush’s legacy.

The most revealing feature is the interactive “decision points” game, where visitors are asked to decide for themselves on the same contentious decisions that Bush faced with the information the library says he had to hand when he made them: whether to deploy federal troops after Hurricane Katrina; whether to bail out Wall Street; and whether to invade Iraq.

The Iraq conundrum is presented with carefully chosen language that nudges players in a particular direction using touchscreens (no expense is spared in a library that cost $250 million). As visitors peruse the evidence, they are interrupted with breaking- news updates that may influence their decision. At the end, visitors are asked to choose: “seek new UN resolution”, “lead international coalition” or “take no action”.

Regardless of your choice, Bush appears on the screen in front of you in a recent video to explain why he chose to invade Iraq – the world was made safer with Saddam Hussein’s removal, he says.

On a television screen at the “Fighting the Global War on Terror” wall exhibit, the Bush museum lists Ireland as one of 58 countries that “contributed troops to Afghanistan and/or Iraq during President Bush’s time in office”. It fails to say that Ireland’s contribution amounted to just seven troops in non-combat roles as part of the UN-mandated International Security Assistance Force in Afghanistan.


Defending legacy
Not since Richard Nixon, whose library in California attracts 90,000 visitors a year, has a presidential museum made such an attempt to defend a presidential legacy.

“The opening and celebration of the library does seem like an attempt, more so than usual, to defend a legacy,” said Allan Lichtman, a history professor at American University in Washington DC.

“He got involved in two very dubious wars, exited on the meltdown of the economy and left office with one of the lowest presidential approval ratings.”

At the dedication ceremony, Bush said visitors would learn from the library that he stayed true to his convictions. He concluded his speech saying, tearfully, that he believed the US’s “best days lie ahead”.

Bush’s museum tries to lay down a marker for posterity in a predictably self-serving manner. He wants his presidency better remembered in the context of the information he had when in the Oval Office. Visitors will leave knowing Bush the man a little better but anyone hoping for an admission of wrong or even remorse for his unpopular policy choices won’t find it in Dallas.