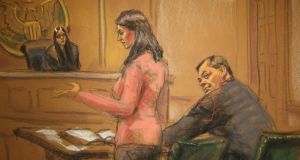 The cover of alleged Russian spies in New York was blown by bugged conversations about their frustration over how mundane their double lives were and references to James Bond and fake identities.

The FBI charged three Russians on Monday for acting as unregistered agents of a foreign government, claiming they were intelligence agents of the Russian Federation.

Prosecutors alleged in court filings that Yevgeny “Zhenya” Buryakov, posing as an employee in the Manhattan office of a Russian bank, passed information to Igor Sporyshev, who was, in name at least, a trade representative for Russia in New York, and Victor Podobnyy, who was based at the Russian mission to the United Nations.

Mr Buryakov was arrested on Monday, while the other two no longer live in the US and are covered by diplomatic immunity.

Using phones wiretaps, electronic bugging and secret video surveillance, the FBI has claimed the men were trying to source economic intelligence on the New York Stock Exchange and recruit female American students at a university as sources of information.

The secret recordings, evoking the kind of tradecraft used during the cold war, show two exasperated spies who do not appear to have been effective.

The FBI said it saw Mr Buryakov meeting Mr Sporyshev about 50 times between March 2012 and September 2014 where he passed him a bag, magazine or slip of paper.

The meetings were almost always preceded by a telephone call where Mr Buryakov told him that he had a ticket, book, list or other “ordinary item” such as umbrella or hat he wanted to give him.

Gregory Monaghan, an FBI agent, said investigators overheard Mr Podobnyy and Mr Sporyshev complaining about how boring their spying work was during a conversation at the New York offices of Russia’s intelligence service in April 2013.

Mr Podobnyy said while he didn’t expect life to be like James Bond movies, he thought he would at least “pretend to be someone else”. Instead, he was “sitting with a cookie” at the “chief enemy spot”.

In another recorded conversation, they complained about how difficult it was to recruit potential sources of information, including young women at a New York university. The two alleged agents appear to have been unlucky in encounters with potential female sources.

“I have lots of ideas about such girls but these ideas are not actionable because they don’t allow you to get close enough,” Mr Sporyshev told his compatriot in April 2013.

“And in order to be close you either need to f**k them or use other levers to influence them to execute my requests. So when you tell me about girls, in my experience, it’s very rare that something workable will come of it.”

Another potential information source, a consultant in New York, was using one of the alleged agents to practise his Russian. “I think he is an idiot and forgot who I am,” Mr Podobnyy told his colleague.

The FBI alleged that Mr Sporyshev asked Mr Buryakov to help him with questions that could be asked by the Russian state-owned news organisation to gather intelligence.

Mr Monaghan claimed he knew from former Russian agents that the news agency was sometimes used for intelligence gathering.