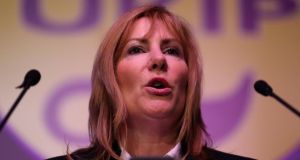 Janice Atkinson. Ukip has removed the whip from the MEP and axed her as a general election candidate “following allegations of a serious financial nature”, the party said. Photograph: PA

A UK Independence Party MEP who had been running for a House of Commons seat is facing a police investigation after one of her staff was filmed asking for an inflated invoice to claim European Parliament expenses.

Janice Atkinson was suspended by the party immediately. Her difficulties have capped an extraordinary 24 hours when the party lost three candidates it was running in May’s general election.

One of her staff, Christine Hewitt, was secretly filmed by the Sun asking a restaurant manager for an allegedly falsified invoice after a lunch held on the margins of the party’s conference last month.

The original bill for less than £1,000 was paid, but Ms Hewitt subsequently got in touch with the restaurant asking for one to be made out for a higher sum.

A member of the restaurant staff is heard on a recording suggesting £3,150. Ms Hewitt then says: “Oh God yeah, that’s more than enough.”

Saying he was unhappy someone in the political world was trying wrongfully to claim expenses, the restaurant manager, David Golding approached the Sun, which set up cameras to record her return. A buffet meal had been given for £5.50 a head, but Ms Hewitt sent an email asking if he could add wine, soft drinks and water to the invoice, Mr Golding told the BBC.

Ms Hewitt allegedly said she would pay the proper bill from a party account but then claim a higher figure from an expenses fund of £1.5 million paid by the European Parliament for the Initiative for Direct Democracy in Europe group.

Ukip leader Nigel Farage told local radio: “I’m astonished by it, frankly.” An investigation would be held immediately. We’ve got to behave absolutely properly and if we see anything we think is wrong, we will come down on it like a tonne of bricks.”