‘If I was back in the same place with the same information, I would take the same decision’

In a lenghty press conference former British prime minister Tony Blair says he takes full responsibility for the failings made in the Iraq War. 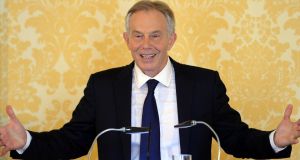 Former British prime minister Tony Blair said on Wednesday he had ‘more sorrow, regret and apology than you may ever know or can believe’ in relation to the UK’s involvement in the Iraq war. Photograph: Getty

Former British prime minister Tony Blair says he takes full responsibility for the failings made in the Iraq War.

In a lengthy press conference on Wednesday afternoon, he mounted a lengthy defence of the Iraq war strategy and said he does not regret the decision he took to invade the country in 2003.

Mr Blair said he was apologising for the mistakes in the planning and process of the war, but he stood by the key decision to invade. “If I was back in the same place with the same information, I would take the same decision, obviously, that’s the decision that I believe was right,” he said.

Responding to the devastating critique in the Chilcot report of his decisionto involve Britain in the Iraq War,Mr Blair said that Saddam Hussein had “ruled with an unparalleled brutality”.

He said for more than 20 years the regime of Saddam Hussein had been a source of conflict and bloodshed and that his was the only regime to have used weapons of mass destruction (WMD).

There was evidence al-Qaida wanted to use these weapons he said, and that the attack on the Twin Towers in the US in 2001 showed they would have used them.

He said:“The decision to go to war in Iraq and remove Saddam Hussein from power in a coalition of over 40 countries led by the USA, was the hardest, most momentous, most agonising decision I took in ten years as British prime minister.

“For that decision today I accept full responsibility, without exception and without excuse. I recognise the division felt by many in our country over the war and in particular I feel deeply and sincerely - in a way that no words can properly convey - the grief and suffering of those who lost ones they loved in Iraq, whether the members of our armed forces, the armed forces of other nations, or Iraqis.

“The coalition planned for one set of ground facts and encountered another, and a nation whose people we wanted to set free and secure from the evil of Saddam, became instead victim to sectarian terrorism. For all of this I express more sorrow, regret and apology than you may ever know or can believe.”

“I took this decision because I believed it was the right thing to do based upon the information I had and the threats I perceived.”

Mr Blair said that while he accepted full responsibility for the decision to go to war, he rejected the argument that terrorism today stemmed from the invasion of Iraq.

He also said he believed the world was a better place without Iraqi dictator Saddam Hussein, who was toppled by the invasion. The dictator would have been strengthened if the US had backed down, he said.

Responding to queries from the press following his lengthy statment, Mr Blair says he can look the nation in the eye and say he did not mislead them.

He said that he did not make the wrong decision in going to war.

Sir John Chilcot, in his report, delivered a devastating critique of Tony Blair’s decision to go to war in Iraq in 2003, with his long-awaited report concluding that Britain chose to join the US invasion before “peaceful options for disarmament” had been exhausted.

The head of the Iraq war inquiry said the UK’s decision to attack and occupy a sovereign state for the first time since the second World War was a decision of “utmost gravity”.

Mr Chilcot said that Mr Blair’s case for military action had been over-hyped.

“The report should lay to rest allegations of bad faith, lies or deceit,” Mr Blair said in an initial response early on Wednesday.

Mr Blair noted that the Chilcot report did make real and material criticisms of the preparation and planning for the war.

The only Labour prime minister to win three general elections, Mr Blair was in office for 10 years until 2007 and was hugely popular in his heyday, but Iraq has severely tarnished his reputation and legacy.

The inquiry report, about three times the length of the Bible, stopped short of saying the war was illegal, a stance that is certain to disappoint Mr Blair’s many critics.