Theresa May promises ‘strong leadership’ in the face of Brexit

Speaking outside parliament, Ms May made clear that, although she opposed Brexit, there was no question of seeking to reverse or undermine the referendum outcome. 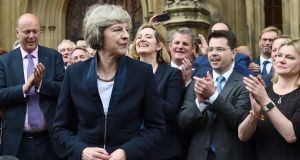 British prime minister-in-waiting Theresa May is applauded as she delivers a statement outside parliament in London, Britain. Photograph: Andy Rain/EPA

Theresa May will become Britain’s second female prime minister tomorrow, following the surprise withdrawal from the Conservative leadership contest of her only rival, Andrea Leadsom.

Ms May, who has been home secretary since 2010, said she would offer “strong, proven leadership” to guide Britain through the political and economic uncertainty that has followed last month’s vote to leave the European Union.

Speaking outside parliament, Ms May made clear that, although she opposed Brexit, there was no question of seeking to reverse or undermine the referendum outcome.

“Brexit means Brexit. And we are going to make a success of it,” she said.

Ms May said she would work to unite the country while seeking the best possible deal for Britain on leaving the EU and forging a new global role outside it.

“We need a strong, new positive vision for the future of our country. A vision of a country that works, not for the privileged few, but that works for every one of us. Because we’re going to give people more control over their lives. And that’s how, together, we will build a better Britain,” she said.

David Cameron will chair his final cabinet meeting today and will answer prime minister’s questions in the House of Commons for the last time tomorrow.

Tomorrow afternoon, he will tender his resignation to Queen Elizabeth at Buckingham Palace.

Ms May will go to the palace shortly afterwards and move into 10 Downing Street tomorrow evening.

The Taoiseach is expected to seek an early meeting with Ms May, whose role at the home office has made her a more familiar figure to Irish officials and Ministers than some of her rivals.

“We worked closely together on justice and home affairs issues, and she is familiar with Northern Ireland issues.”

Ms Leadsom withdrew from the leadership race on Monday after a weekend of hostile news coverage sparked by her suggestion in an interview that she was better qualified to be prime minister because, unlike Ms May, she has children.

Ms Leadsom later apologised to Ms May and she did not refer to the controversy in her statement withdrawing from the contest.

The sudden end to the Conservative leadership contest overshadowed the launch of a formal challenge to Labour leader Jeremy Corbyn.