Petition seeks to keep Donald Trump out of United Kingdom 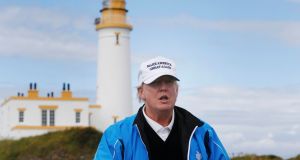 Donald Trump has sparked plenty of discussion since his controversial bid for the US presidency began last year. But for the first time the debate about the prospective Republican nominee for the White House will take place in the wood-panelled chambers of Westminster, as this evening MPs debate calls for businessman to be banned from entering the UK.

The debate will take place in Westminster Hall, the overflow chamber for parliamentary debate at the House of Commons . It comes after a petition calling for Trump to be barred from the UK garnered more than half a million signatures, well in excess of the 100,000 needed to trigger parliament’s petitions committee.

It comes in the wake of a series of provocative comments from Trump, including accusing Mexico of sending “rapists” to the US and a call for “a total and complete shutdown of Muslims entering the United States” in the wake of the San Bernardino shooting last month.

The petition was set up in late November by Suzanne Kelly, an American citizen who has lived in Aberdeenshire for more than a decade.

Two similar petitions seeking to have Mr Trump barred from Ireland are also currently being examined by officials in the Oireachtas for compliance with standing orders.

“I started this petition for my neighbours who were targets because of their religion and national origins, for my friends who were insulted because of their race, and my sisters, denigrated for being women,” said Kelly, who runs an online news source called Aberdeen Voice.

“The huge number of signatures signals to me that people are weary of speech designed to drive wedges through communities,” she added.

Kelly will not be present in London for the debate, but is pleased that the parliamentarians will discuss her petition.

Trump’s presidential bid and his contentious remarks have been keenly followed in Scotland. Trump’s mother hails from the island of Lewis and the tycoon has significant business interests in the country.

In the wake of his comments about Muslims entering the US, Robert Gordon University in Aberdeen stripped Trump of an honorary degree awarded in 2010. In addition, Scottish first minister and Scottish National Party leader Nicola Sturgeon withdrew the entrepreneur’s membership of the Global Scot business network.

The Scottish National Party has always been at loggerheads with Trump. In 2008, the SNP- dominated Scottish Parliament stepped in when Aberdeenshire Council rejected Trump’s bid for planning permission for a £1 billion luxury golfing complex.

The sprawling development on the scenic Aberdeenshire coast went ahead in the face of vocal local opposition. But Trump’s relationship with Salmond when he was Scottish first minister turned sour after a decision was made to site 11 wind turbines near the Aberdeenshire golf course.

Last June, an Edinburgh court dismissed Trump’s request for a public inquiry into what he says was the Scottish government’s unfair approval for the wave power project.

If banned from the UK, Trump has threatened to cancel a claimed £700 million investment in Scotland. His holdings in the country already include the famous golf course at Turnberry.

Such a ban is unlikely. British prime minister David Cameron called Trump’s remarks about Muslims “divisive, stupid and wrong” but has signalled that his Conservative government would not refuse Trump entry into the UK.

MPs will also discuss a separate petition opposing such a ban, even though it only gained about 40,000 signatures.

Labour MP Helen Jones, chairwoman of the petition committee, said: “By scheduling a debate on these petitions, the committee is not expressing a view on whether or not the government should exclude Donald Trump from the UK.

“As with any decision to schedule a petition for debate, it simply means that the committee has decided that the subject should be debated,” Jones said. “A debate will allow a range of views to be expressed.”