Musician on recent work: ‘I love Kanye and he loves me. He’s a monster, he’s a crazy guy’ 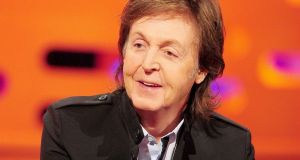 A file photograph of Paul McCartney who has revealed he started drinking heavily and came close to quitting music after The Beatles broke up. Photograph: Ian West/PA Wire. 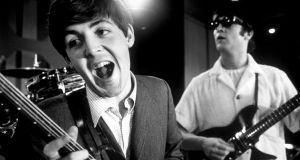 Paul McCartney has said he started drinking heavily and came close to quitting music after The Beatles broke up.

The musician said he ended up forming Wings when he stopped enjoying the party lifestyle.

Reflecting on his life and career at a recording of Mastertapes for BBC Radio 4, McCartney said: “I was breaking from my lifelong friends, not knowing whether I was going to continue in music. I took to the bevvies. I took to a wee dram. It was great at first, then suddenly I wasn’t having a good time. It wasn’t working. I wanted to get back to square one, so I ended up forming Wings.”

McCartney also acknowledged that some of the criticism levelled at Wings was fair but he doesn’t regret collaborating with his wife Linda, who died in 1998.

“To be fair we weren’t that good. We were terrible. We knew Linda couldn’t play but she learnt and, looking back on it, I’m really glad we did it,” he said.

“I could have just formed a supergroup and rung up Eric Clapton and Jimmy Page and John Bonham, but we graduated from playing universities to town halls, which was quite funny as I’d been at Shea Stadium quite recently. But you still remember the names of the people who gave you really bad, vicious reviews: Charles Shaar Murray shall ever be hated!”

The former Beatle told the crowd in the BBC’s Maida Vale studio, which included Brad Pitt, James Bay and Paul Weller, how glad he was to repair his relationship with John Lennon before he was killed in 1980.

Their relationship became strained because of business matters but McCartney said: “I was really grateful that we got it back together before he died. Because it would have been very difficult to deal with if... well, it was very difficult anyway.”

After playing a few bars of Here Today, the song he wrote about Lennon in 1982, he said: “When I was thinking of all the things I never said to him. I’m quite private and don’t like to give too much away. Why should people know my innermost thoughts? But a song is the place to put them. In Here Today I say to John, ‘I love you’.

“I couldn’t have said that to him unless we were extremely drunk — I love you, man! But you can put these emotions, these deeper and sometimes awkward truths, in a song.”

He admitted the competition he felt with Lennon helped him to create some of his best work. After being asked if it is harder to write songs as he gets older, McCartney replied: “In concerts I’m singing these songs by this 20-something- year-old kid and I’m thinking: ‘Why are these songs so good?’

“And I think it’s because when you’re young you listen to everything that’s going on around you and you take it all in. You’re very excited with the world, you’re not all jaded and all the information — Elvis, Sinatra, the BBC news — all that stuff that’s been through your mind gets printed out in a song.

“When you’re younger, more magical things come to you — being in a band, the competition with John, being kids, suddenly getting famous... all that lent itself to good work. If John came up with a brilliant song, I’d go, ‘OK, let’s try and be brillianter’. But I still do it and it’s great.”

McCartney is still keen to collaborate with younger musicians, recently teaming up with Kanye West, and Rihanna for FourFiveSeconds — which led to a Grammys’ performance that saw his new wife Nancy Shevell dancing with West’s wife Kim Kardashian in the audience.

On working with West, he said: “I love Kanye and he loves me. He’s a monster, he’s a crazy guy who comes up with great stuff so he inspires me. It was definitely different, because we never appeared to write a song; a lot of what we did was just telling each other stories.”

McCartney recalled West told him he’d become fascinated with the Picasso painting Man with a Guitar, and how its subject was playing a chord with only two fingers.

He said he sang West a tune backed entirely by two-fingered chords, recalling: “He didn’t appear to really notice, and then after Christmas I get this track back, a thing called All Day — he’s taken my melody and he’s made it seriously urban, which is funny because the lyrics use the n-word — a lot! ‘How long have you been at the mall?’ ‘All day, n-word!’

“It’s a great record, sonically it’s brilliant, but quite a few people said, ‘You can’t be connected with this, there’s, like, 40 n-words!’ People like Oprah, who’s a little conservative about that stuff, said, ‘You shouldn’t do it, even black people shouldn’t use that word’. I said, ‘Yeah, but it’s Kanye! And he’s talking about an urban generation that uses that word in a completely different way’. It’s the context. So I was actually pleased with it.”

The episode of Mastertapes will be broadcast on BBC Radio 4 at 10am on Saturday.