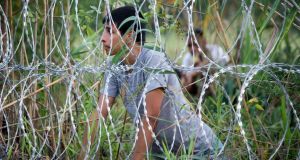 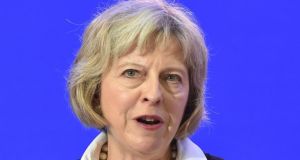 Britain’s home secretary Theresa May who said that net migration in to Britain was ‘far too high’ and ‘simply unsustainable’. Photograph: EPA

Germany, France and Britain have jointly called for urgent EU talks on the escalating migration crisis in Europe.

The three “underlined the necessity to take immediate action to deal with the challenge from the migrant influx”.

The call came after Germany’s Thomas de Maizière, Britain’s Theresa May and France’s Bernard Cazeneuve spoke about the crisis on the sidelines of a meeting in Paris on Saturday on transport security after passengers thwarted an attack on a high-speed train from Amsterdam to Paris.

On Sunday, France’s foreign minister said the attitude of several countries towards the crisis was “scandalous”.

Unprecedented numbers of migrants are reaching EU borders, surpassing 100,000 in July alone and reaching more than 340,000 this year so far. Italy and Greece are struggling to cope, while Macedonia has declared a state of emergency.

The three politicians also called for reception centres to be set up urgently in Italy and Greece in order to register new arrivals, and for a common EU list of “safe countries of origin” to be established, which would theoretically allow asylum applications to be fast-tracked for specific nationalities.

Germany, which is expecting to receive 800,000 asylum seekers this year, has been pushing for such a list, arguing that it would free up resources to help those fleeing war and persecution.

The call comes after Mrs May, the British home secretary, said that the current levels of migration are unsustainable and that only European migrants with a job lined up should be allowed into the UK.

“Net migration at that volume is simply unsustainable,” May wrote in an editorial in the Sunday Times. “It puts pressure on infrastructure, such as housing and transport – and public services, such as schools and hospitals.”

She argued that the biggest single factor preventing the government from meeting its immigration target was net migration from the EU.

Mrs May said countries across Europe were realising that the Schengen agreement – which produced Europe’s borderless area – has exacerbated the migration crisis that has dominated the continent this summer.

“The events of this summer have shown that the most tragic consequences of a broken European migration system have been borne by those at risk of exploitation,” she said.

“And the greatest beneficiaries have been the callous gangs who sell false dreams and trade on the free borders within the EU.”

Mrs May said that suggesting migration cannot be controlled within the EU – which gives freedom of movement to member state nationals – was “defeatist and wrong” and flies in the face of the evidence.

Separately, Hungarian police say they have arrested a fifth man over the deaths of 71 people, thought to be migrants, found in an abandoned lorry in Austria.

The man is the fourth Bulgarian to be held over the find near the Hungarian border. The other man is Afghan.