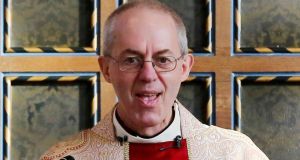 Archbishop of Canterbury Justin Welby described the Bill to be debated in the House of Lords today as “mistaken and dangerous”. Photograph: PA

Changing the law on assisted dying could create “death squads” by putting the decision in the hands of doctors, a cancer specialist said.

Prof Karol Sikora told BBC’s Newsnight that should the law come in, it would be at odds with providing good healthcare.

Peers will debate former Labour lord chancellor Lord Falconer’s Bill on assisted dying in the House of Lords today when it comes before them for a second reading.

The Bill proposes allowing doctors to prescribe a lethal dose to terminally ill patients judged to have less than six months to live.

Care minister Norman Lamb also outlined his personal stance that people should be able to “make their own decision about their life”, reiterating the stance he outlined in March that he would vote in favour of allowing assisted dying.

Mr Lamb – emphasising that he was speaking as an MP, not as a minister, as the issue would be decided by a free vote in Parliament – said he had come to his decision after “talking to an awful lot of people, people who’ve gone through the experience of a loved one dying”, who had seen loved ones “going through months of pain and distress”.

He told the programme: “Ultimately you have to ask the question, who should it be that decides? Should it be me, or anyone else in that situation, or should it be the state? Ultimately I think it’s a very personal decision.”

The Liberal Democrat said that family members were put in an “invidious position” of not knowing whether they would be prosecuted for helping a loved one to end their life.

He added: “I think that there are very clear safeguards, the safeguards are absolutely critical, in a sense it was the fear of exploitation which always caused me concern in the past.

“But ultimately, should we stand in the way of someone wanting to make their own decision about their life, or should we set the safeguards in place to ensure that there is every chance of avoiding that exploitation?

“I’m very clear in my mind that the individual should be the person who decides, not the state.”

British prime minister David Cameron yesterday spoke of his “worry” about legalising euthanasia, saying that he was “not convinced that further steps need to be taken”, and that “people might be being pushed into things that they don’t actually want for themselves”. – (PA)