Did British spies force the IRA to renounce violence? 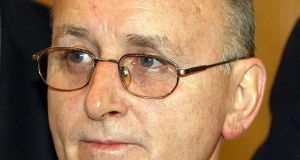 I mostly listen to stories for a living. Stories that people are often reluctant to admit they know. They tell them to me in their homes, coffee shops, cars and parks and, more often than not, they are alone.

Several months ago, I was contacted by a man who said he had a story to tell.

His was among the most elusive I’ve come across, because “Martin” told me he was a spy who brought RUC special branch deep within the IRA and Sinn Féin.

Martin was paid to betray other people’s secrets. His very survival was premised on his ability to tell lies.

Over months, I listened to Martin, I never stopped asking him questions and I corroborated as much detail as possible without compromising him.

He cannot be identified because he fears for his safety, but he’s not anonymous to me.

In the course of one of our meetings, Martin opened up about the late Denis Donaldson, whom he had known when Donaldson was Sinn Féin’s head of administration in Stormont. Both men were supposed to be working to a republican agenda.

However, both were agents of the British state. And when Martin betrayed a boast made by Donaldson, it set off a chain of events which ultimately led to the unmasking of Donaldson as an agent of British intelligence.

When Donaldson later gave a press conference and confessed he was an agent within the IRA, the consequences went beyond the personal.

His admission went to the heart of the secret intelligence war between the IRA and the state, because Donaldson was an “agent of influence”.

His key value as an agent was not the secrets he disclosed, but the subtle influence he could bring to bear when key decisions were being taken by those at the top of the republican movement.

Security sources told Spotlight that, by 1994, a majority of the seven-person IRA army council were effectively compromised because of their proximity to high-level agents.

The council’s decisions were, they said, influenced by IRA insiders who were also secret British agents.

Informers and agents not only betrayed the IRA’s secrets, but some, such as Denis Donaldson, were used over decades, to influence its strategy at the highest level.

For republicans, the scale of infiltration within the IRA raises uncomfortable questions.

Was the IRA rendered ineffectual by many of its own members who were also informers and agents of the state?

Did the secret intelligence war force the IRA to renounce violence?

Did spies within its own ranks bring the IRA in from the cold?