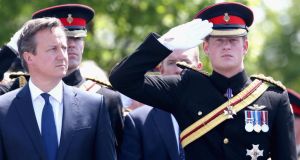 Britain’s prime minister David Cameron looks on as Prince Harry salutes at the unveiling of a memorial to British troops killed in Afghanistan at The National Memorial Arboretum in Stafford, England, on Thursday. Mr Cameron is expected to press ahead next week with plans to reduce the rights of non-English MPs to vote in the House of Commons. Photograph: Chris Jackson/Getty Images

Britain’s prime minister David Cameron is expected to press ahead with plans to reduce the rights of non-English MPs, including Northern Ireland’s 18 MPs, to vote in the House of Commons as early as next week.

The controversial plan, dubbed “English votes for English law”, or “Evel”, is principally targeted at Scotland, though it affects Wales and Northern Ireland to a lesser extent. It threatens to provoke a significant constitutional battle.

Under the plans, the speaker of the House of Commons, currently John Bercow, would be required to determine whether a piece of legislation covered all of the UK or if its reach was confined to England.

All MPs would be able to vote on the second and third readings of such legislation, but the detailed work at committee stage – where legislation is examined line by line – would be handled by a new English grand committee.

Scottish National Party MP Pete Wishart, the newly appointed chairman of the Commons’ Scottish Affairs Committee, said the Conservatives were creating “huge constitutional issues” that would place the speaker of the house in “an invidious position”.

However, Mr Cameron, who emphasised the need for a greater voice for the English just hours after Scots had rejected the independence referendum last September, appears prepared to brook no opposition to the plans.

Former SNP leader Alex Salmond, who returned to the Commons in last month’s general election, said Mr Cameron was breaking a centuries-old fundamental principle that all members of the House of Commons “are equal”.

Despite the doubts held about the plan in many quarters, there is an acceptance that the current rules cannot sustain, given the increasing amounts of power that have been devolved to Belfast, Cardiff and Edinburgh over the past decade and beyond.

Despite the opposition of the SNP Welsh nationalists Plaid Cymru and the Labour Party, which say the unity of the UK would be undermined, Mr Cameron faces complaints, from his side that his plans do not go far enough.

Separately, the SNP will finally table an amendment to the Scotland Bill asking for “full fiscal autonomy” – the power for Scotland to decide on and raise all of its own taxes – even though critics warn that such a move would create an £8 billion (€11 billion) black hole in Edinburgh’s accounts.

The SNP had gone relatively quiet on the demand in recent months, saying in its election manifesto only that it wanted such powers while emphasising it would take a considerable time for such changes to be implemented.