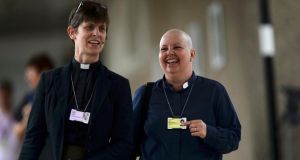 Two members of the clergy leave the Church of England’s Synod during a lunch break in the session today which later approved the consecration of women bishops, in York, UK. Photograph: Nigel Roddis/Reuters 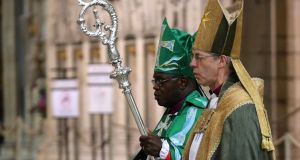 Archbishop of York John Sentamu (l) and the Archbishop of Canterbury Justin Welby process through York Minster during a Eucharist Service on July 13th, 2014 in York. Photograph: Christopher Furlong/Getty Images

Women bishops could be appointed by the end of this year in the Church of England after legislation backing the move was given final approval by the General Synod.

Members of the Church’s governing body voted in favour of a measure allowing women bishops in a historic vote at York University today.

The legislation received the necessary two thirds majority in all three Houses of the General Synod, with 37 bishops voting in favour, two against and one abstention; and 162 clergy in favour, 25 against and four abstentions.

In the crucial lay votes there were 152 votes in favour, 45 against and five abstentions.

In spite of an appeal from the Archbishop of York, Dr John Sentamu, for the result to be heard in silence as is traditional in the Church of England at key votes, there was some clapping and shouts of “brill” from within the hall when the outcome was announced.

The success in the make-or-break vote comes after a plan to introduce women bishops collapsed in November 2012 when it was derailed by just six votes cast by lay members.

The Archbishop of Canterbury, the Most Rev Justin Welby, staked his authority on a new set of proposals, bringing in mediation and conflict experts in an effort to resolve differences.

Speaking in the debate, Archbishop Welby assured traditionalists that Church of England bishops were committed to meeting their needs should they pass the legislation.

“I expect and hope that this vote will go through and I rejoice in it. But I also rejoice that we promise to seek the flourishing in the church of all those who disagree,” he said.

“If I did not think that was likely I could not support this legislation. You don’t chuck out family or even make it difficult for them to be at home, you love them and seek their well-being even when you disagree.

“The House of Bishops means what we say.”

Earlier in an emotional debate, the General Synod heard from a series of speakers who said they had voted against the legislation in November 2012 but would now cast their votes in favour or abstain.

Dr Philip Giddings, from the Oxford Diocese, and head of the House of Laity, announced that he would be voting in favour, having voted against in November 2012.

He told the General Synod: “I will vote for this legislation today.”

Prudence Dailey, from the Oxford Diocese, who voted against in November 2012, told members she would abstain.

“I intend to abstain because I believe we have arrived at a solution which the majority of people in all parts of the church can agree to live with, I have no desire to block that,” she said.

She said she hoped and expected the legislation to be passed, vindicating the concerns expressed by opponents of the plans put before the General Synod in November 2012.

“In November 2012 in the aftermath of the vote, it is hard for me to forget the bile, vitriol and disapprobation that was heaped on the heads of those, particularly those in the House of Laity, who defeated the measure. If I stick my head above the parapet I expect to have bricks thrown at me, I have never minded that.

“What I did mind was the implication that we were somehow, if we were grudgingly allowed these opinions, not allowed to express these through our votes.”

Adrian Vincent, a lay member from the Guildford Diocese, drew an emotional response from a prominent pro-women campaigner when he said he would be voting in favour of the legislation in spite of his membership of the Catholic group.

He voted against in November 2012.

“I shall be voting in favour today. By doing so, I am betraying what I believe, I am betraying those who trusted in me,” he said. “I hope that the promised commitment to mutual flourishing is not a commitment that will run out of steam in a few years.”

He was praised by Christina Rees, a prominent supporter of women bishops from the St Albans Diocese.

Close to tears, she said: “Adrian Vincent has made a sacrificial decision today for the sake of the church, he has shown his loyalty as an Anglican and as a member of the Church of England. I was not prepared for what he said, it absolutely stunned me.”