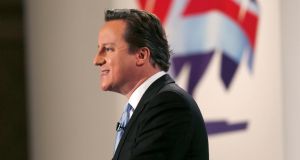 In his speech, David Cameron, who has not convinced many Conservatives that he is truly one of them, sought to press every emotional button among his grassroots. Photograph: Suzanne Plunkett/PA

He enjoyed the encounter, apparently, but he certainly enjoyed it more than the speech he gave to lacklustre applause from the hundreds who had turned up at the conference.

In his speech, Cameron, who has not convinced many Conservatives that he is truly one of them, sought to press every emotional button among his grassroots.

Competitive sports in schools were good, and would be supported, supportive families were needed to produce a new generation, while “the left-wing establishment” was assailed at every turn.

The need to resort to “comfort blanket” language illustrates the gulf that exists between Cameron and the grassroots, who have been uncomfortable with his modernising agenda since they first caught sight of it in 2005.


Gay marriage
For many, the breaking point has been Cameron’s support for the legalisation of gay marriage – a move that has led to hundreds of party members quitting local associations.

For others, including Bob Woollard, the head of a new pressure group called Conservatives Grassroots, gay marriage is “a symptom” of the wider malaise affecting the Conservatives.

A “cohort of modernisers have got the prime minister’s ear, and it is time that they packed their bags and went”, he told a fringe event attended by dozens of the Conservative delegates.

Back in the main hall, British home secretary Theresa May, who had gone on manoeuvres a week previously when she laid out her vision of conservatism, was back on script. Extolling Cameron’s virtues, she insisted he was the one to lead the Conservatives into the 2015 general election and on to the promised land of majority rule.

However, the febrile chatter about Cameron’s position just will not go away, even if no one is ready to take him on – while a majority in the party still believe no one else can do better.


‘Calm down’
Former cabinet minister Andrew Mitchell, ejected after the “plebgate” controversy, urged Conservatives to follow the advice of the late Michael Winner: “Calm down, dear.”

“That’s exactly what the Conservative Party needs to do – calm down. To win the next election the Tories need to be purposeful, competent and united. If we look fratricidal, or unsure of the course set by the prime minister, we will lose. And lose big,” said Mitchell.

Privately, local Conservative organisations are concerned about the threat posed by the UK Independence Party (Ukip).

In a weekend poll, the Nigel Farage-led populists were again reported to have gained ground, standing at 17 per cent – enough to win House of Commons seats if support peaks in concentrated districts.

Ukip is not likely to be short of meat in coming months, particularly given May’s admission, the clearest yet, that she can do nothing to stop Bulgarians and Romanians coming to the UK from January next.

Instead, changes would be made to ensure welfare benefits are not abused, or that the National Health Service does not end up becoming “the international health service”, she said.