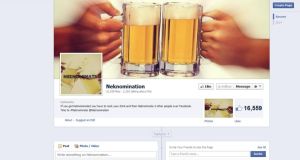 Facebook screengrab of a page promoting the Neknomination drinking game.

Police in UK are investigating links between the deaths of two British men and the controversial drinking craze Neknomination.

The two victims, from Cardiff and Essex, have died just a week after two men from Clare and Dublin lost their lives after taking part in the extreme challenge.

The craze involves participants filming themselves downing alcohol, nominating someone to continue the game, and posting the video on Facebook.

Participants are often dared to outdo the exploits of those who nominated them.

The mother of a man from Wales whose death may have been caused by the game has spoken of her utter devastation.

Stephen Brooks died on Sunday following a night out with friends in Cardiff at the weekend.

Paramedics were called to home after took a turn for the worse - but reportedly found he had died in his sleep.

Police confirmed they were investigating the death, which is not thought to be suspicious, and they had received information regarding Neknominate.

Mr Williams’ mother Paula described her son as kind, generous and loved by everyone who met him.

She said: “The community here will not be the same without him - he would do anything to help anybody.

It is believed Mr Williams collapsed after attempting to down a pint of vodka.

A video of him taking part in Neknominate was posted on to Facebook- but was later removed when news he had died suddenly the next morning.

Friends of Mr Williams, who suffered severe leg injuries in a road accident a year ago, called on people not to take part in Neknominate.

Friend Sofia Caffell said: “It really has to be stopped before this happens again. Let this be a lesson to everybody.”

According to the Daily Mirror, the first UK victim of the game died at the weekend.

The paper’s website reported that former grammar school boy and youth hostel worker, 20, drank a cocktail of wine, whisky, vodka and lager before collapsing and dying in the early hours of yesterday.

Police and student groups in the UK and Ireland have previously warned people about the dangers of taking part in Neknominate.

In Ireland, Jonny Byrne and Ross Cummings both died after apparently trying to complete their challenges.

A force spokeswoman said: “Officers investigating his death on behalf of HM coroner have received information regarding the so-called neck and nominate game.

“Inquiries are continuing and a post-mortem is taking place.”

Anti-binge drinking campaign groups said they were saddened to hear of another death linked to NekNominate.

Alcohol Concern chief executive Eric Appleby said it was devastating for family and friends to lose a loved one in this way.

“This lethal ‘game’ shows just how hard we have to work to de-normalise binge-drinking among young people,” he said.