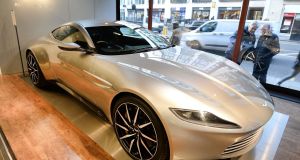 An Aston Martin DB10, which was built specifically for the latest James Bond film ‘Spectre’, on display in the window of Harrods in Knightsbridge, London. Photograph: John Stillwell/PA Wire

Aston Martin is to auction off one of the 10 cars it made for the latest James Bond film, Spectre.

The DB10, designed by Aston creative director Marek Reichman, features a 4.7-litre V8 petrol engine and has an estimated top speed of around 305km/h.

But unfortunately for petrolheads, the carbon fibre car - which has a reserve price of £1 million (€1.3 million) - will be sold strictly as a collector’s item and is not approved for use on public roads.

Most of the DB10s seen racing around Rome in Spectre were adapted for use in the film - which racked up $73 million on its opening weekend in the US, but destroyed $36 million worth of cars during the shoot.

But the DB10 to be offered through Christie’s is one of only two “show” cars left unmodified and it is currently in the window of Harrods in Knightsbridge, London.

Money raised by the auction, which is set to take place on February 18th in London, will go to Médecins Sans Frontières, the aid group.

Aston has a long association with the Bond franchise, stretching back to the DB5 - a luxury grand tourer that was used in the 1964 film Goldfinger and made a reappearance in the 2012 film Skyfall. The Warwickshire-based company did not pay to appear in the latest film, beyond providing the cars.

Aston says the DB10 is an indication of the kind of styling it will employ on future models, such as the upcoming DB11 sports car.

The priciest new Aston is the £1.5 million (€1.98 million) Vulcan hypercar, but a vintage DB4 GT recently sold at auction in New York for £9.5 million (12.5 million), making it the most expensive British car.