UK Politics: The populist age is everywhere but on the statute books, at least for now 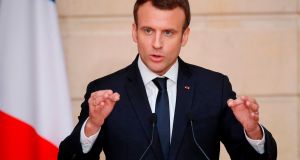 New political movements, such as French president Emmanuel Macron’s En Marche, are disparaged for their intellectual vacuity – until they win. Photograph: Charles Platiau via AP

If the worst thing that can happen to a new project is to be ignored, a party of the British centre ground has a chance, after all.

The latest people to try, steered by the entrepreneur Simon Franks, are drenched from the Victoria Falls of cold water that has been poured on their idea. The yet-to-be-named party is doomed, say well-wishers, not just enemies, by its reliance on shop-soiled politicians from the recent past, its lack of ideas, its support from donors of the faceless, cat-stroking kind, its air of de haut en bas and its geographic spread of potential voters in an electoral system that rewards concentration.

Some of these problems are more real than others. A wider donor base would make it harder for cynics, including Conservatives who should know better, to demonise this “rich man’s party”. But the Brexit campaign was not financed by the spare pennies of honest draymen either, and still won.

As for ideas, lots of political movements are disparaged for their intellectual vacuity until they win. Tony Blair’s New Labour, David Cameron’s modernised Tories and Emmanuel Macron’s En Marche are just the most recent examples of vague but well-led platforms that carried the public. The individual leader comes first. The ideas follow, and sometimes never do.

The unavailability of such a leader is one of British centrism’s besetting curses, but there is an even more obvious problem. Nothing has happened yet. The hard but crucial thing to remember about the great age of populism, the historic rout of the centre, globalisation’s writhing ordeal, is that almost all of it is prospective. It amounts to a series of electoral shocks that have not had time to work much tangible effect on the governance of nations, and therefore on people’s lives.

The creation of a successful new party is not just difficult, it is mostly beyond anyone’s control

The implementation of Brexit is still years away, on the other side of a transitional phase. Fifteen months into his US presidency, Donald Trump’s foremost legislative achievement is a corporate tax cut that most of the hated “globalists” would drink up. Over the same period, the most notable policy change in Europe has been Macron’s attempted supply-side reform of France. Exactly what is a voter of the liberal centre meant to be mobilising against at this point, beyond the atmospheric change?

The economist Robert Solow, unimpressed with the growth-boosting properties of information technology, once said that the computer age is everywhere but in the productivity statistics. The populist age is everywhere but on the statute book, at least for now. There have been some disturbing reversals for liberalism: in eastern and central Europe especially, and on the subject of immigration. But the overall balance of government policy in the democratic west, including Britain, has not changed drastically since the Year Zero of 2016.

This can change, and probably will. But until it does, middle-ground voters are being invited to react against something that has not occurred – against the idea, not the felt reality, of illiberalism. It is too little to hang a new party on. No one calls the police because they fear a burglary in the medium-term future. It is the immediacy of a threat that concentrates the mind.

Looking back, no one is surprised that an anti-globalisation movement failed to materialise in, say, 1980, when Margaret Thatcher and Ronald Reagan had just been elected and the intellectual right was still talking a better game than it had legislated. Yet at an equivalent stage of this new populist era – if it turns out to be any such thing – the lack of a liberal resistance is seen as an ignominious failure. In fact, it is natural.

The creation of a successful new party is not just difficult, it is mostly beyond anyone’s control. It requires a mating of historic circumstance and the human element, in the form of an outstanding individual. All the same, Franks and his like are right to detect lots of unspoken-for voters in modern Britain. They are middle-income, largely apolitical workers who do not answer to the mystifying name “centrist”, but simply have a material interest in continuity. (Most people in work voted Remain.) They are frustrated by the world as it is, but do not believe it needs turning upside down.

The trouble is, as of spring 2018, the world has not been upturned. Their material lives have not changed enough. As much as politics has pitched and yawed noisily in recent years, policy itself has not. If that changes, and these voters feel their hard-won living standards compromised by ideological hot-heads, watch the “insurmountable” barriers to a new centrism tumble. Voters cannot be persuaded of that which has yet to be felt. – Copyright The Financial Times Limited 2018