Tributes paid to Irishman and UNHCR official who died in Kenya

Andreas Needham (44), a graduate of DIT, had undergone hip surgery in Nairobi 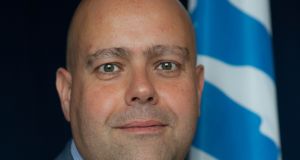 Tributes have been paid to Irishman and UNHCR communications official Andreas Needham, who died suddenly in Kenya at the weekend aged 44.

Mr Needham had undergone hip surgery earlier in the week at the Aga Khan hospital in Nairobi.

Mr Needham was the UNHCR’s public information and communications officer for Iraq, based in Baghdad. His family home was in Nairobi.

He was one of the early recruits to the Irish Aid Rapid Response Corps in 2007 and was seconded the following year to the United Nations to work on its response to the post-election violence in Kenya.

He later worked for the UNHCR on missions in Somalia, Ethiopia and Jordan, dealing with the fall out for refugees from war and famine. This included a 12-month stint as media officer for the world’s largest refugee camp at Dadaab, on the border between Kenya and Somalia.

A tribute to Mr Needham posted by UNHCR Iraq said: “Andy was passionate about refugees and displaced persons and was incredibly dedicated to his work. His sense of humour, team spirit and love of life rendered him a cherished friend and co-worker. His smile will live on with us. He will be truly missed.”

The staff council of the UNHCR has opened a book of condolence for him.

Born and raised in Dublin, Mr Needham was a journalism graduate from the Dublin Institute of Technology. His earlier career here included a period as editor of Garda Review, and public relations roles with O’Herlihy Communications and Irish technology company Norkom. He was also media and public relations officer with the FAI League of Ireland for a number of years.

He was also a long-time member of the National Union of Journalists, serving on its Irish Executive Council and as chairman of its Dublin P&PR branch.

“Many will recall his support at the conference in 1998 for striking Ryanair baggage handlers, expressed while wearing a Mickey Mouse mask to reflect distain for ‘staff associations’ and the anti-union stance of Michael O’Leary,” the NUJ’s Irish Secretary Séamus Dooley said in a tribute posted on the union’s website.

“His interventions were frequently laced with humour but Andy was a serious trade unionist and, as a branch officer he worked hard on behalf of his members.”

Mr Needham is survived by his wife Tabitha, his stepdaughter Chessie, his mother, three sisters and brother.