No indication any Irish people among crash victims 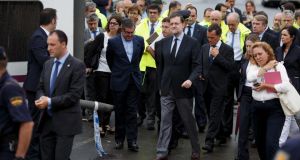 Taoiseach Enda Kenny has written to Spain’s prime minister Mariano Rajoy expressing sympathy on behalf of the Irish people to those injured in the crash and the families of the dead.

Mr Kenny said Santiago and the Galician region was a popular destination for Irish travellers and the Irish embassy in Madrid had been in contact with the regional authorities since the accident occurred.

Increasing numbers of Irish people have visited Santiago and its centuries-old cathedral in recent years having participated in the El Camino de Santiago pilgrimage, followed by Christians since the Middle Ages.

President Michael D Higgins also offered his condolences on behalf of the State. “I have written to the King of Spain as head of state, expressing our sympathy and our sorrow with the people of Galicia, ” he said.

Tánaiste and Minister for Foreign Affairs Eamon Gilmore said there was no indication yesterday that any Irish people had been among the victims of the tragedy.

“The situation is still developing and it will be some time before all of those involved have been identified,” he said.

The Department of Foreign Affairs said it was awaiting details from the Galician authorities, who were preparing a list of all passengers and staff on board the train.

“ The entire Catholic community here in Ireland is spiritually close to you and all who have been affected at this time and I assure you of our on-going prayers. The region of Santiago de Compostela is a place that is close to the hearts of many Irish people. I invite all Irish people currently on pilgrimage to offer their prayers for those who have died in this tragic accident,” he said.

A Book of Condolence will open from 7am tomorrow at St Andrew’s Church, Westland Row, Dublin.