New pontiff makes impassioned plea for defence of the poor 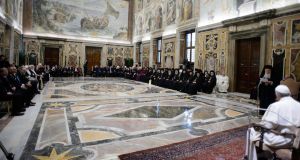 The new pontiff made his appeal in an address to diplomats accredited to the Vatican. Photgraph: L'Osservatore Romano/Getty Images

Pope Francis urged the West today to intensify dialogue with Islam and appealed to the world to do more to combat poverty.

The new pontiff made his appeal in an address to diplomats accredited to the Vatican, sending a message through them to the leaders of the more than 170 countries with which the Vatican has diplomatic relations.

Speaking in Italian, he also made another impassioned appeal for the defence of the poor and of the environment, saying richer countries should fight what he called "the spiritual poverty of our times" by re-forging links with God.

"How many poor people there still are in the world! And what great suffering they have to endure!" he told the diplomats in the Vatican's frescoed Sala Regia.

He urged them to help keep religion central in public life and promote inter-religious dialogue as a catalyst for efforts to build peace.

"In this work (peace building), the role of religion is fundamental. It is not possible to build bridges between people while forgetting God," he said.

"But the converse is also true: it is not possible to establish true links with God while ignoring other people. Hence it is important to intensify dialogue among the various religions, and I am thinking particularly of dialogue with Islam." Francis, the former Cardinal Jorge Mario Bergoglio of Argentina, said he was grateful that many Muslim religious and civilian leaders attended his inaugural Mass on Tuesday.

"Fighting poverty, both material and spiritual, building peace and constructing bridges: these, as it were, are the reference points for a journey that I want to invite each of the countries here represented to take up," he said.

He underlined the importance of protecting the environment when he explained why he had decided to take the name of St. Francis of Assisi, who is associated with austerity, help for the poor, and love of nature.

"Here too, it helps me to think of the name of (Saint)Francis, who teaches us profound respect for the whole of creation and the protection of our environment, which all too often, instead of using for the good, we exploit greedily, to one another's detriment," he said.