Olympic flame arrives in Rio, but mood locally is chilly

As €10m is splashed out on showcase games, the state suffers from a shortage of cash 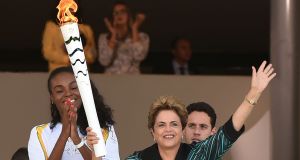 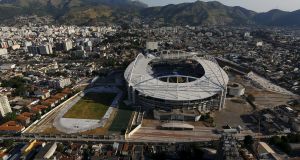 It was a melancholy event when President Dilma Rousseff welcomed the Olympic flame to Brazil on Tuesday.

Back in 2009 when Rio de Janeiro won the right to host the Olympics for the first time in South America, then president Luiz Inácio Lula da Silva said the victory was recognition “that the time has come for Brazil”, with the games set to be a showcase for the country’s economic and social progress.

But when kicking off the national cross-country torch relay in Brasília, Rousseff felt forced to reassure the world that the country’s entwined economic and political crises would not damage the summer spectacle that starts in just three months.

“Even living through a difficult, truly critical, period in our history and the history of our democracy, Brazil will know how to offer athletes and visitors the best welcome,” she said in what was possibly her last official Olympic engagement.

Next week she is set to be suspended from her job by the senate as it decides whether to impeach her, meaning it is vice-president Michel Temer who is likely to officiate at the opening ceremony in the Maracanã stadium on August 5th.

But while Brazil remains paralysed as Rousseff’s fate is decided, with its economy spiralling deeper into recession, the one bright spot for the country is the Olympic preparations. It did not always seem that this would be the case. After a visit in 2014, International Olympic Committee members slammed the country’s preparations as “the worst ever”.

Since then huge strides have been made. In the western reaches of Rio the two main venues are receiving their finishing touches. Amid the elegant cluster of indoor arenas at Barra Olympic Park, which will hold the biggest concentration of events, local organisers are beaming with pride at having broken with national stereotypes and delivered large infrastructure projects on time.

“This is a great success for Brazil. We completed the works on time and within budget which is not something very common for public works in Brazil. With the Olympics we have advanced in how we execute infrastructure projects here,” says Roberto Ainbinder, director of projects for the Municipal Olympic Company, charged with delivering the sporting venues.

But beyond the chainlink fence that surrounds Olympic Park the picture is less rosy, questioning the thesis that hosting the games would spur urban renewal in the exotic but dilapidated beach-front city. Rio’s already chaotic traffic has been made almost unbearable by the last-minute rush to finish new bus lanes and a metro extension. But bad traffic is the least of the problems of many of Rio’s six million residents.

Having participated in a €10 billion spending spree to be ready for the games, Rio’s state government is now suffering from a fiscal crisis that threatens to close hospitals and schools and has left police without the money to put petrol in patrol cars. Funding for a much-lauded programme to improve conditions in the city’s slums has been gutted. So critical are the state’s finances that even the early warning system for mudslides was recently shut off due to lack of funds to operate it.

Across the city payments to public employees and pensioners have been delayed since the start of the year while more than 70 state schools have been occupied by their students in protest at the deteriorating quality of education.

“We are nearing a social collapse in our state,” Leonardo Espindola, the state governor’s chief of staff, warned recently.

The result is that, rather than building up for a party, the city is in a surly mood, and if poor ticket sales are a guide, residents have other things on their mind than fencing and weight-lifting.

“There isn’t a mood favourable to staging the games in the city today,” says Marcelo Freixo, a Rio politician and prominent critic of how the Olympic preparations have been carried out.

“Cariocas [Rio natives] are welcoming people so [the games will] happen and visitors will be well received. But it is now clear that mega-events like the World Cup and Olympics do not bring any improvements to the lives of residents. What happened instead is that they became projects to benefit large companies rather than those who live here.”

Even the transport infrastructure projects that are the games’ main legacy to the city are the target of criticism. The new bus lanes and metro extension all converge in the fast growing western zone of Barra, one of the city’s wealthiest regions, a suburban sprawl of highways, gated communities and shopping malls whose land bank is subject of some of South America’s most intense property speculation.

“What is Barra in the context of Rio? It is a landscape based on exclusivity,” says Juliana Barbassa, author of Dancing with the Devil in the City of God, a new book that charts the impact of the games’ preparations on the city. “Inequality is a marker in Rio and it is one of the things we wanted to get away from. These Olympics were supposed to be for the people. And instead we got massive venue construction and infrastructure projects that directed more money into the same pockets that always had money funnelled into them.”

The incestuous relationship between Rio’s politicians in charge of delivering the Olympics and Brazil’s big construction companies was laid bare by the collapse last month of a new coastal bike path built for the games. Just three months after being opened a wave washed away part of the elevated track, killing two people. After the tragedy it was revealed that the over-budget but poorly executed project was carried out by a company owned by the family of Rio’s tourism secretary.

“This tragic episode is revelatory about the relationships here in Rio between the city and state governments and construction companies,” says state deputy Freixo. “And I have no doubt that more Olympic contracts will be investigated because there has been much over-billing and a lack of oversight.”

Already all the big construction companies involved in preparing Rio for the games have been caught up in the corruption scandal at state oil giant Petrobras and federal prosecutors say they are investigating evidence that politicians and builders also rigged the preparations for the games for their mutual benefit.

Now facing years of grim austerity, such graft probes are not exactly the legacy Rio’s residents hoped staging the world’s premier sporting festival would bequeath it.

“In 2009 Brazilians wanted to show the world what this new Brazil in the making could do,” says Rio author Barbassa. “But now we have a moment that is almost the exact opposite economically, politically, socially. It is like the country has been turned inside out. And so Brazilians’ pride and optimism in their own futures has blown over and we have a situation that is almost tailor-made to highlight the flaws in the promise of the Olympics as an urban renewal tool.”