Officials promise investigation will be thorough 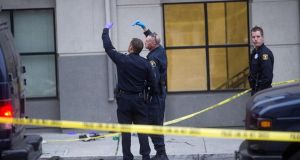 The owner of the building is named as a company called Blackrock, and it is managed by a firm called Greystar. Photograph: Noah Berger/AP

City officials in Berkeley, San Francisco, said no rock would be left unturned in its investigation into how an apartment balcony collapsed claiming the lives of six Irish students and seriously wounding seven others.

While police ruled out any immediate evidence of a criminal aspect in relation to the building standards, inspection records are to be made publicly available.

At a press conference yesterday, just hours before the first family members of the deceased were due to arrive in the city, an official said more information on the inspection would be known within 48 hours. He confirmed that records of any complaints were kept by the city and would be published.

A senior police officer said they had responded within two minutes to the emergency call at 12.42am. An earlier noise complaint was made in relation to the party but, he explained: “We did not respond to that call because four minutes after that call came in we received multiple complaints of shots being fired in south Berkeley.”

The officer said even had police responded to that initial noise complaint – which was logged at 12.02am – they would not typically have sought entry to the building or conducted an inspection. At that time, it was unclear how many people had been on the balcony. “At this point we still have no indication of criminal activity or some criminal intent,” he said.

The press conference, at about 9pm Irish time, was also addressed by the Irish Consul General to San Francisco, Philip Grant, who said the incident was “deeply, deeply tragic and it touches every family in Ireland”.