US vetos some countries from anti-IS coalition

Russia, Syria and Iran out in the cold, despite situation on the ground 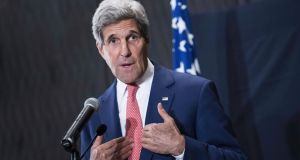 US secretary of state John Kerry says Iran’s alliance with the Syrian government in its fight against insurgents excludes engagement with Tehran. Photograph: Brendan Smialowski/Reuters

US secretary of state John Kerry vetoed the participation of Iran in today’s foreign minister-level talks in Paris to devise strategies for tackling Islamic State (IS).

French president François Hollande had suggested inviting Tehran if there was consensus on its presence. Iranian ambassador to Iraq Hassan Danaee declared Tehran would take part, but Kerry said Iran’s alliance with the Syrian government in its fight against insurgents excludes engagement with Tehran. Ironically, Iran and Syria are the only two countries offering to participate fully in the proposed US-coalition.

Kerry’s stance contradicts US actions on the ground in Iraq, where US warplanes are bombing IS units fighting Iranian-backed Iraqi army troops, Iranian-advised Kurdish peshmerga fighters, and Iranian-trained and armed Shia militiamen.

Furthermore, Kerry’s deputy, William Burns, has been discussing IS with Iranian counterparts on the sidelines of negotiations over Iran’s nuclear programme.

Iran is a major contributor to the campaign against the IS in both Iraq and Syria. Gen Qassem Suleimani, commander of the Quds Brigade of Iran’s Republican Guards, is in Baghdad helping direct operations that, due in part to US air cover, have regained for Baghdad control of the Mosul and Haditha dams and contained IS.

Syria, where IS has its main base, has also been excluded from the Paris conference.

Syrian presidential adviser Bouthaina Shaaban has said the US is making a major mistake by barring his government from the anti-IS coalition. Syrian foreign minister Walid Muallem declared that US air strikes on IS targets in Syria would be considered aggression unless authorised by Damascus.

Kerry responded by saying that the US would not coordinate air attacks on IS with Syria, but would ensure that their forces didn’t clash.

US regional experts argue the American plan to train and arm “vetted” insurgents fighting the government will not work as these groups remain divided, weak and incapable of facing IS.

The experts say the battle- hardened Syrian army is the only force in the country capable of tackling IS. In their view the US should press the Syrian political opposition and insurgents to reach an accommodation with the government and forge a common front against IS, al-Qaeda’s official Syrian branch Jabhat al-Nusra, and allied factions.

Despite the international campaign against IS, “moderate” groups continue to join IS fighters in operations against Syrian troops and Lebanese soldiers across the border. This weekend in al-Hajjar al-Aswad district south of Damascus, “moderates” signed a non-aggression pact with IS.

Russia is the third key power excluded from the Paris gathering and the coalition. Moscow has provided political support, arms, petrol, and other aid to Damascus since the beginning of the crisis, and can be expected to condemn US air raids against IS in Syria if not authorised by Damascus. It’s also expected to veto any UN Security Council resolution legalising such action.

Moscow has a keen interest in the suppression of IS as more than 800 jihadis from the Caucasus are said to be fighting with IS forces in both Syria and Iraq. This is the largest contingent of jihadis from non-Muslim countries.

As the only powers with leverage on Damascus, Iran and Russia could exert pressure on Syria to reach a deal with the opposition and some insurgent groups in exchange for agreement on a transitional government.