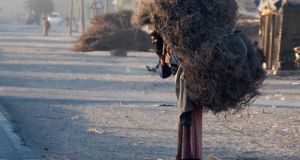 A woman in Deir al-Zor carries tree branches to be used for heating. Photograph: Reuters

UN humanitarian chief Valerie Amos has called on the Security Council to put “sustained pressure” on the Syrian government and armed opponents to facilitate delivery of urgently needed food and medical assistance to civilians. She said UN and aid agencies had been unable to reach 2.5 million trapped by fighting, and pointed out that malnutrition is on the rise; polio, once eradicated, has revived; and Syrians were succumbing to cancer and diabetes for lack of treatment.

“Words, despite their ability to shock, cannot really paint a picture of the grim reality of Syria today,” she said, criticising the government for failing to grant visas to aid workers and the 2,000 anti-government factions for blocking deliveries. She said kidnapping of aid workers and hijacking of trucks carrying supplies is “increasingly common. Without real and sustained pressure [on all sides] . . . it will be impossible to make progress.”

Humanitarian access
The council issued a non-binding statement repeating a call for humanitarian access. According to a report commissioned by the UN Development Fund and the agency serving Palestinian refugees, and drawn up by the Damascus-based Syrian Centre for Policy Research, half the 24 million Syrians live in poverty, with 7.9 million falling into it since the crisis began and 4.4 million suffering extreme poverty.

Unemployment has reached 48.6 per cent, 49 per cent of children are not in school and the health sector faces “significant collapse”, the report says.

The country’s gross domestic product is experiencing “spectacular collapse,” due to contraction by 34.3 per cent in the first quarter of 2013 and 39.6 per cent in the second quarter as compared with 2012. By the first quarter of this year, the total economic loss was $103.1 billion, because of destruction, looting, loss of industrial production, bankruptcy, capital flight, racketeering, and extortion.

Chemical weapons
The government has handed over on time to chemical weapons teams a plan for the elimination of Syria’s stockpiles. Experts from the Organisation for the Prohibition of Chemical Weapons have visited 19 of 23 locations and destroyed equipment for mixing chemicals and filling shells in all but one. The routes to several sites are in contested areas. Nineteen leading armed fundamentalist factions warned that only traitors would attend the Syrian peace conference in Geneva on November 23rd,

Iranian president Hassan Rouhani told UN envoy Lakhdar Brahimi that Tehran is “ready to play a positive role in any movement that would contribute to stability in Syria” and called for the expulsion of “terrorists” from that country. Mr Brahimi has urged Iran’s inclusion despite Arab and western reluctance.

He is due in Damascus today for talks with the government, which will attend the conference.