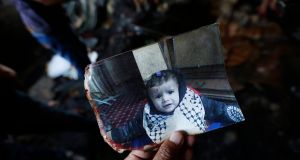 A photo of 18-month-old Ali Dawabsheh, who was killed with his parents in an arson attack on their home in occupied West Bank, for which a man and minor have been charged with murder. Photograph: Alaa Badarneh/EPA

Israeli prosecutors filed murder charges today against a man and a minor for an arson attack in the occupied West Bank that killed three members of a Palestinian family and helped fuel the fiercest eruption of street violence in years.

The attack on July 31st killed 18-month-old Ali Dawabsheh and his parents Saad and Riham.

Amiram Ben-Uliel, a 21-year-old from a Jewish settlement in the West Bank, was charged with three counts of racially motivated murder at Lod court near Tel Aviv. A second Jewish defendant, whose name was withheld due to his age, was charged as an accessory.

Defence lawyers said the pair had given false confessions under torture in closed-door interrogations, an allegation denied by prime minister Binyamin Netanyahu and the Shin Bet security agency.

“I doubt such confessions will stand up in court,” lawyer Hai Haber told reporters. “We know there’s no significant external evidence linking the suspects to this incident.”

The attack in Duma village and ensuing Israeli investigation laid bare fissures in Netanyahu’s coalition government, where one ultra-nationalist partner voiced misgivings about the handling of Jewish suspects.

Thirteen other Israeli Jews, most of them minors, were also indicted for hate crimes, including assaulting a Palestinian, vandalism of Arab property and setting fire to a church.

Referred to in Israel as “price-tag attacks”, such offences have usually been carried out in what the attackers say are reprisals for Palestinian violence against Israelis or government curbs on unauthorised West Bank settlement building.

Saad Dawabsheh’s brother Naser said he hoped the defendants would receive the maximum penalty, but was sceptical of Israel’s seriousness in prosecuting the case.

“We have no trust in the Israeli judiciary. They would not have launched an investigation were it not for the international pressure on them,” he said, accusing the government of effectively “support[ing] the terrorism conducted by [West Bank] settlers against our people”.

The time it has taken Israel to crack down on the Jewish militants, compared to the speedy and sometimes lethal response by state security forces to similar actions by Arabs, has angered Palestinians, contributing to a wave of stabbings, car-rammings and shooting attacks against Israelis since October 1st.

Twenty-one Israelis and a US citizen have died in the latest bloodshed, a number that will rise if police deem a Tel Aviv shooting that killed two people on Friday as a pro-Palestinian attack. The gunman, an Israeli Arab, is at large.

Israeli forces or armed civilians have killed at least 132 Palestinians, 82 of whom authorities described as assailants. Most of the others were killed in clashes with security forces.

Israeli minister for agriculture Uri Ariel of the ultra-nationalist Jewish Home party had urged a high-level investigation of the allegations that the Duma defendants were tortured and for a Shin Bet overhaul. His party’s leaders, minister for education Naftali Bennett and minister for justice Ayelet Shaked, disagreed.

Israeli officials said their investigation into the attacks by far-right Jews were hampered by the suspects’ operating in small, tight-knit cells and eluding electronic surveillance.

Mr Netanyahu said the indictments demonstrated the rule of law in Israel, telling his cabinet in broadcast remarks: “We oppose murder of all kinds. We oppose violence of all kinds.” – Reuters