Moscow rules out a lasting ceasefire, despite demands from western governments 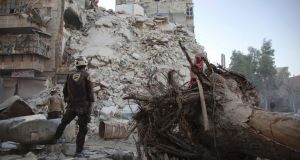 A member of the Syrian civil defence, known as the White Helmets, stands amid the rubble of a destroyed building during a rescue operation following reported air strikes in the rebel-held Qatarji neighbourhood of Aleppo. Photograph: Karam Al-Masri/AFP/Getty Images

Russian and Syrian armed forces will pause attacks on the Syrian city of Aleppo for eight hours on Thursday to allow civilians and rebels to leave the city, the Russian defence ministry said on Monday.

But Moscow ruled out a lasting ceasefire, a step that western governments have been demanding, saying that would only give Islamist rebels in the city an opportunity to regroup.

Russian aircraft and Syrian forces loyal to Syrian president Bashar al-Assad have been bombarding rebel-controlled districts of Aleppo since the collapse of an internationally brokered ceasefire last month.

“Given the situation, a unilateral ceasefire makes no sense, since Jabhat al-Nusra and groups allied to it will once again be given a breather, will regroup and restore their military capability,” Rudskoy said, referring to a rebel group previously allied to al Qaeda.

He said Russia was working with other powers to achieve a peace deal for Aleppo, but that would take time, so in the meantime it had decided to initiate a humanitarian pause. The pause is intended “first and foremost so that civilians can move freely, for the evacuation of the sick and wounded, and also for the removal of rebels,” he said. “On October 20th from 0800 (0500 GMT) until 1600, a humanitarian pause will be implemented in the area of Aleppo. For that period, Russia’s air force and Syrian government forces will halt air strikes and firing from other weapons,” he said.

Separately , 14 members of the same family were killed in an air strike in rebel-held eastern Aleppo on Monday, emergency service workers said, as the Syrian government pursued its Russian-backed campaign to capture opposition-held areas of the city.

A list of the dead published by the civil defence included several infants, among them two six-week-old babies and six other children aged eight or below. The civil defence identified the jets as Russian. The attack hit the city’s al-Marjeh area.

The civil defence is a rescue service operating in rebel-held areas of Syria. Its workers are known as White Helmets.

The campaign has killed several hundred people since it started last month after the collapse of a truce brokered by Russia and the United States. The Syrian Observatory for Human Rights said it had documented the deaths of 448 people in air strikes in eastern Aleppo since then, including 82 children.

Syrian and Russian militaries say they only target militants.

Since the campaign was announced on September 22nd, the government has captured territory from rebels to the north of the city, and also reported advances in the city itself which rebels have in turn said they have mostly repelled.

A Syrian military source said the army had targeted terrorists in three areas of Aleppo on Monday, killing seven of them. The government refers to all rebel fighters as terrorists.

The observatory said 17 more people were killed in attacks by Russian jets on Sunday night in the al-Qarterji district of rebel-held Aleppo. That included five children, it said.

The monitoring group also said it had recorded the deaths of 82 people including 17 children in government-held areas of western Aleppo as a result of rebel shelling.