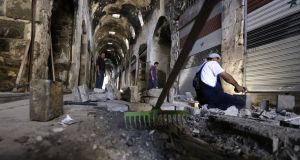 Members of the United Nations Development Programme working in a damaged alley of the ancient market in Homs as part of the renovation project, which has now been halted. Photograph: Louai Beshara/AFP/Getty Images

The road from Aleppo enters Homs though the rubble mountain moonscape of the northern Khaldiya quarter, heavily shelled by the Syrian army while occupied by rebels during 2012-13.

The level of destruction here is greater even than in the southwestern district of Baba Amr, the flashpoint that engraved on the world’s consciousness terrible images of the Syrian war.

In Baba Amr buildings still stand; Khaldiya is a wasteland that bulldozers will have to clear away. There are no people and no cars on the road. Khaldiya has been consumed by the folly of war.

The devastation halts at the slightly damaged Khaled Ibn Walid mosque, a regal Ottoman-era presence in a wide green park, marking the line between Khaldiya and the Old City. Here schoolchildren with backpacks make their way home from a day’s classes, merchants stand in the sun outside their shops, and soldiers at a checkpoint open and close boots of cars entering the quarter to make certain there are no guns or explosives.

Suicide bombings carried out by al-Qaeda offshoots in Damascus have tightened security everywhere.

The Old City’s 3,500-4,000 year-old souq has been under renovation for more than six months. During the 2012-14 battle for Homs, the narrow alleyways of the souq served rebel fighters as a means of communication between Khaldiya and the Old City.

The metal roof was pierced by bullets and shrapnel, some arcades and shops were burnt, others collapsed by mortars and artillery shells. Looters took everything of value, even prising Roman-era decorative features from walls and door-frames.

Beautiful new metal screens arch over several streets in the souq, throwing patterned shadows on the freshly laid stone flags underfoot. Three or four workmen are busy affixing a new section of the screen positioned by a crane but other work has halted.

Restoration was meant to be completed last year but so far only 13 shops have reopened out of the pre-war 4,600. Revival of the souq, once the commercial heart of the Old City, was a pilot project intended to encourage reconstruction throughout this quarter, provide employment, and encourage shop-keepers and Old City residents to return instead of becoming part of Syria’s humanitarian crisis. Last autumn, global media flocked to Homs to hail the completion of the first stage of reconstruction.

The souq has fallen victim to politics. Syria’s director of antiquities, Maamoun Abdulkarim, has repeatedly warned against the intrusion of “politics” when addressing the rescue of the country’s ancient and medieval cultural heritage which, he says, “belongs not only to Syrians but to the world”.

The United Nations Development Programme (UNDP), which is financing the reconstruction, has halted funding. The agency is, reportedly, divided. One camp is determined to carry on while the other claims the souq should not be given priority. Donors are said to have criticised making the souq a pilot project while Syria is in urgent need of basic infrastructure such as electricity, water, healthcare and housing.

Homs municipality, the local sponsor of the project, is also split between supporters of the work and rivals who oppose providing aid to Old City merchants who backed rebels when they seized the area. Provincial governor Talal al-Barazi backs reconstruction.

Punishing shopkeepers by refusing to rebuild the heart of the Old City, covering 20 per cent of the quarter, could prompt Homsis living elsewhere in Homs and those settled in Damascus or abroad to abandon this quarter.

Furthermore, residents of other areas formerly held by insurgents could regard the partially-completed Homs souq as a sign that devastated habitat and heritage elsewhere could suffer the same fate.