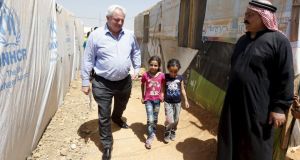 The conflict in Yemen has left the poorest country in the Middle East on the brink of famine, the United Nations said on Thursday, as a bomb killed four people near the governor’s office in the southern city of Aden .

Speaking after a three-day visit to Yemen, she said aid was not reaching all areas due to violence and warned of “irreversible” damage unless food reaches 1.2 million malnourished children.

A World Food Programme ship was in the port at the time of the attack.

The crisis for Yemenis has been intensified by closed banks, non-payment of salaries for months, closure of hospitals, shelling of civilian areas by both sides, heavy Saudi bombing of infrastructure and the lack of funds for aid. The UN needs $100 million over the next three months to provide essential assistance.

Thirteen educators and four children in their care were killed, and 20 injured, in an air strike on Wednesday on a teachers’ office in Amran, north of the Houthi-controlled capital Sana’a.

The UN has placed Yemen alongside Iraq, Syria, and South Sudan at the highest level of humanitarian catastrophe. Amnesty International reports that Yemeni civilians are bearing the brunt of the conflict raging between Shia Houthi rebels supported by dissident army units and anti-Houthi groups backed by a Saudi-led military coalition, which has “also killed and wounded civilians in unlawful air strikes which failed to distinguish between military targets and civilian objects” in Houthi-held areas.

In a 23-page report entitled, Nowhere Safe for Civilians, Amnesty, which blames all parties, says conflict, raging in 20 of the country’s 22 provinces, has killed 4,000 and displaced over one million.

Sunni Saudi Arabia argues the Houthis have the backing of Shia Iran, the kingdom’s regional rival. Experts say Tehran provides only verbal and political support; the Houthis have raided army stores for weapons and supplies and are reinforced by army units loyal to ousted president Ali Abdullah Saleh.