Binyamin Netanyahu ridicules lawsuit, saying Palestinians are ‘stuck in the past’ 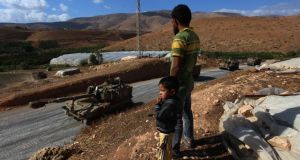 A Palestinian farmer and his son watch Israeli troops making their way through Palestinian farms during a military exercise near Jeftlik in the Jordan valley. Photograph: Alaa Badarneh/EPA

Wednesday marked the 99th anniversary of the Balfour declaration, the British government pledge of support for establishing a Jewish homeland in the then Ottoman territory of Palestine. However, as Israel planned events to mark the centenary year, Palestinians launched a campaign against the “crime of the Jewish colonialist project”.

The declaration, published on November 2nd, 1917, was conveyed in a letter by British foreign secretary Arthur James Balfour to Lord Walter Rothschild, a prominent member of the British Jewish community. It proclaimed Britain’s support for Zionist aspirations and London’s commitment to the establishment of “a national home for the Jewish people”.

Israel and Jewish communities worldwide are planning a series of events to mark the centenary, the biggest diplomatic victory for the Zionist movement, which came on the eve of the British conquest of the Ottoman territory of Palestine.

However, the Palestinian leadership said they were considering suing the British government after President Mahmoud Abbas said the Balfour declaration “paved the road for the Nakba, or catastrophe, of the Palestinian people and their dispossession and displacement from their land”.

“Britain gave, without any right, authority or consent from anyone, the land of Palestine to another people,” he told the UN general assembly in September.

Balfour promised to support a national home for the Jews in Palestine as long as the “civil and religious rights of existing non-Jewish communities” were respected. The Palestinians have always claimed that this crucial proviso was ignored, as large numbers of European Jews settled in mandate Palestine, igniting a conflict that remains as intractable as ever.

The majority of Palestinians hold similar views. A poll released last month by the An-Najah university in the West Bank city of Nablus found that 75 per cent of Palestinians in the West Bank and Gaza agreed with Mr Abbas that Britain should accept the historical, legal, political, material and moral responsibilities relating to the consequences of the Balfour declaration, including offering an apology to the Palestinian people.

Asked if they considered Britain responsible for the “catastrophes that befell the Palestinian people”, 79 per cent said yes.

Palestinian foreign minister Riyad al-Malki said the Palestinians would sue the British government because London was responsible for all “Israeli crimes” committed since the end of the British mandate in 1948. He appealed to all member states of the Arab League to support the campaign.

“That’s almost 100 years ago,” he said. “Talk about being stuck in the past. The Palestinians might as well file a class action suit against Abraham for buying land in Hebron. “

A British foreign office spokesman said that the government recognised sensitivities surrounding the declaration but would not be apologising for it.

“The Balfour declaration was a historic statement and one that the UK government will not be apologising for,” the spokesman said. “We are focused on encouraging the Israelis and Palestinians to take steps which bring them closer to peace.”