Israel stops labourers from entering after stabbing attacks in settlements 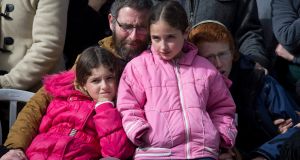 Natan Meir, the husband of Israeli woman Dafna Meir who was killed when she opened the door of her home in the settlement of Otniel on Sunday, at her funeral in Jerusalem. Photograph: Abir Sultan/EPA

Israel has barred all Palestinian labourers from West Bank settlements after two stabbing attacks inside settlements left a woman dead and another injured.

Some 26,000 Palestinians have permits to work inside settlements, mostly in construction. On Monday, workers were ordered to leave settlements in the Etzion bloc, south of Bethlehem.

The spate of violence, mostly stabbings and car rammings, perpetrated by young Palestinians unaffiliated to militant groups, is now in its fourth month. 25 Israelis and one US citizen have been killed, along with at least 148 Palestinians, 94 of whom Israel has described as assailants.

A pregnant Israeli woman in her 30s was seriously wounded in Monday’s stabbing attack at a clothing store in the settlement of Tekoa, south of Bethlehem. The 15-year-old Palestinian assailant was shot and seriously injured.

“The terrorist attack happened while another woman who was murdered inside a settlement was being laid to rest,” he said. “This wave of terrorism has been terrible, but now the terrorists are entering people’s homes and communities.”

Ms Meir struggled with the assailant until he overpowered her in the kitchen. Her 17-year-old daughter, who heard her screams, ran to her aid, only to see the attacker repeatedly stab her.

Israeli troops were still searching for the assailant on Monday night. Security sources said he probably worked on a building site in Otniel and fled to a Palestinian village.

Only two days before the attack, Meir wrote about her security concerns in the Otniel newsletter.

“Lately I have been thinking a lot about the security situation, having thoughts about what I should and shouldn’t do, about the fears, about my husband and the children. The situation isn’t easy, and sometimes it feels like a game of Russian roulette,” she wrote.

Also on Sunday, a young Palestinian was shot and killed after reportedly trying to stab soldiers at a military base in the northern West Bank.

Prime minister Binyamin Netanyahu vowed that the army would track down the Otniel assailant.

“Whoever tries to harm us, we will bring him to justice,” he said. “In the end he will be found and he will pay the full price.”

Opposition leader Yitzhak Herzog, head of the Zionist Union, criticised the government over the ongoing violence.

“The lack of security is a result of the radical right-wing government that obstinately refuses to separate from the Arabs,” he said.