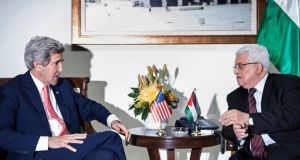 US secretary of state John Kerry and Palestinian president Mahmoud Abbas talk before a meeting in the West Bank city of Ramallah yesterday. Several hundred Palestinians marched in Ramallah ahead of the meeting chanting “Kerry, you coward, there’s no place for you in Palestine”. Photograph: Brendan Smialowski/Reuters

A senior Palestinian official has indicated Ramallah will reject the framework agreement being drawn up by US secretary of state John Kerry in an effort to narrow the gaps between Israeli and Palestinian negotiators.

“The Palestinian side will not even look at a worthless piece of paper, a framework agreement, which contains general principles for later negotiations, when the two sides have already been negotiating for months and years,” he said in a statement published in the al-Ayyam newspaper.

His comments came as Palestinian president Mahmoud Abbas held talks in Ramallah with Mr Kerry, who plans to present his framework agreement to the sides later this month.

Several hundred left-wing Palestinians marched in Ramallah ahead of the meeting, chanting: “Kerry, you coward, there’s no place for you in Palestine!”

Mr Kerry said the US bridging proposals would cover the most contentious issues, including security, borders, refugees and Jerusalem.

‘Tough decisions’
On Thursday Mr Kerry held more than five hours of talks with Israel’s prime minister, Binyamin Netanyahu, and warned that the time was close for the leaders to take difficult decisions.

Israeli foreign minister Avigdor Lieberman, who met Mr Kerry yesterday, suggested issues such as the fate of Palestinian refugees should be addressed sooner rather than later, before the signing of a framework agreement.

US Republican senator John McCain, who is also in Israel, said after talks with Mr Netanyahu the Israeli leader had reservations over the US proposals

‘Serious concerns’
“Netanyahu has serious, serious concerns about the plan as it has been presented to him, whether it be on the ability of Israel to defend its borders, on the reliability of a Palestinian state . . . and particularly on the overall security,” Mr McCain said. “We also are very concerned.”

Meanwhile, the condition of former Israeli prime minister Ariel Sharon, who has been in a coma since 2006, has worsened.

Prof Zeev Rotstein, director of the Tel Hashomer hospital near Tel Aviv, said in a statement yesterday that Mr Sharon (85) had suffered a further gradual deterioration in the functioning of his vital organs.

“His state has not changed. He’s still in critical condition and his life is in danger.”

5 Minister to consult Cabinet over call for Rusbridger’s resignation